Over the past several months, many Berkshire Hathaway shareholders have been thinking about the company’s strategy for Burlington Northern Santa Fe which was acquired on February 12.  Is it a “crazy deal” as Columbia University Professor Bruce Greenwald has claimed?  Or is it a “heck of an investment” as Fairholme Fund’s Bruce Berkowitz claims?  The answer ultimately comes down to deployment of free cash flow.

In January, we suggested that Warren Buffett’s investment rationale for Burlington Northern must include some level of expansion capex in order to justify the price paid for the company.  In that article, we provided an exhibit that shows that cumulative free cash flow for the five years ending December 31, 2009 was approximately $6.6 billion.  A significant portion of operating cash flow was dedicated toward capex, and 80 percent of that capex was identified by management as “maintenance” capex.  Of the $6.6 billion in free cash flow (after capital expenditures), over $5.9 billion was returned to shareholders either in the form of dividends or share repurchases.  The exhibits from the January article are repeated below. 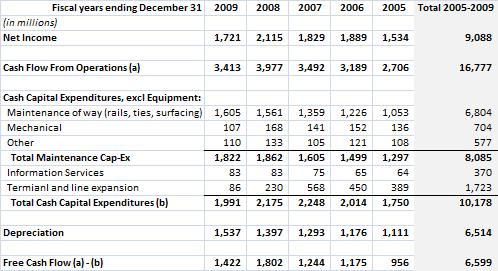 GHARIB: So do you have a wish list of projects that you just couldn’t do as a public company but now seem possible.

ROSE: There is no doubt that Warren has been very clear he wants to us reinvest in the railroad. And if you think about, if you are a public company, in terms of generating free cash flow, you really have three different alternatives. Buy back your stock. Dividend out to your shareholders or reinvest in your company either your own company or through a strategic acquisition. We no longer can buy back our own stock because we don’t have any so we’re down to dividending (ph) up to Berkshire as the parent or reinvesting in our company. And I think Warren’s made it clear that he wants to see us reinvest back in the railroad.

There can be no further doubt that Burlington Northern expects to reinvest future free cash flows into the railroad.  If Berkshire had owned all of Burlington Northern for the past five years, the $5.9 billion returned to shareholders would logically have been reinvested instead.

The big question is when this increased level of capex will begin and in what areas the railroad plans to expand.  According to Burlington Northern’s latest 10-K, capital expenditures for 2010 are expected to be below 2009 levels:

The Company’s planned capital commitment program for 2010 is approximately $2.4 billion, or about $240 million lower than 2009 primarily due to fewer expected locomotive acquisitions in 2010. BNSF expects to spend about $2.1 billion for track, signal systems, structures and freight cars, and to upgrade technologies, including the unfunded federal mandate for positive train control. The Company anticipates acquiring approximately 170 locomotives at a cost of about $320 million.

The 10-K was filed prior to the acquisition so plans could very well have changed.  However, during the first quarter, there were no indications of a rapid expansion in capex.

As we have discussed in past articles as well as in The Rational Walk’s 2010 Berkshire Hathaway Briefing Book, Berkshire has traditionally favored investments in businesses that have low capital requirements.  Insurance is an excellent example of a business that requires negative working capital because of the float generated by premiums being paid prior to the emergence of claims.  Warren Buffett has also highlighted See’s Candies and Business Wire as businesses requiring very low levels of capital.

The problem for Berkshire is that the company generates a massive amount of cash flow from subsidiaries and this cash flow must either be reinvested in new acquisitions, in existing subsidiaries, or returned to shareholders in the form of dividends or share repurchases.  There are not many businesses of significant size that generate high returns on low levels of invested capital and can be purchased at bargain prices.  One reason for Berkshire’s investment in MidAmerican ten years ago was that the company would serve as a good destination for Berkshire’s capital and could earn reasonable rates of return.

The rationale for the Burlington Northern acquisition is similar to MidAmerican, however it is not yet clear whether the company can profitably reinvest its own internally generated free cash flow let alone consume additional investments from Berkshire funded by the free cash flow of Berkshire’s other operations.

We noted with some interest Burlington Northern’s recent expansion in Alabama as a potential indication that the railroad may be looking at extending to the eastern part of the United States where it currently does not have operations.  However, pending the disclosure of specific plans by management to ramp up expansion capex, much of this is just speculation. What is not speculative at this stage is management’s intent to increase capex, as we can see by Mr. Rose’s recent comments.