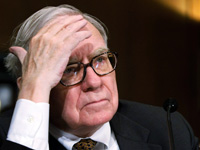 In a CNBC interview this morning, Warren Buffett revealed that the worst investment he ever made was buying controlling interest in Berkshire Hathaway in 1964.  This statement should not come as a surprise to those who have followed Mr. Buffett’s prior statements and letters to shareholders over the years.  Berkshire Hathaway’s textile business was in decline in the mid 1960s and despite years of efforts to compete, was ultimately shut down entirely twenty years later.  Berkshire Hathaway’s value today is derived from Mr. Buffett’s investments in insurance companies and other assets that slowly but steadily diverted capital from textiles into more profitable ventures.

Mr. Buffett estimates that using Berkshire Hathaway as the vehicle for his investment activities probably resulted in today’s company being worth half of its ultimate potential had he instead used a good insurance company as the foundation.  We recently presented a brief account of Berkshire’s early history in our essay From Cigar Butts to Business Supermodels which provides some more details.  Mr. Buffett’s comments are presented in the video shown below as well as CNBC’s transcript of the conversation.

For RSS Feed Subscribers, please click on this link for the interview.

Value investors typically spend a great deal of time evaluating whether a quantitatively cheap stock represents real value or could be a “value trap”.  Mr. Buffett is really saying that Berkshire Hathaway was a value trap and that he purchased it for all the wrong reasons.  The overall record of Berkshire Hathaway over the past 45 years is all the more impressive given the anchor of the failing textile business that depressed results for the first twenty years under Mr. Buffett’s management.