Buffett on Berkshire’s Valuation: It’s at the Low End

Longtime shareholders of Berkshire Hathaway know that Warren Buffett hardly ever comments directly on his assessment of the company’s intrinsic value.  In an interview with Bloomberg at today’s special meeting of shareholders, Mr. Buffett made an exception to his usual silence on the matter when he was asked about issuing shares of Berkshire to pay for part of the Burlington Northern transaction.

The question of whether the bid for Burlington sends any signals regarding Mr. Buffett’s views on Berkshire’s intrinsic value has been discussed here shortly after the transaction announcement in November and again after the proxy statement was released in December.

Here are excerpts from the interview:

You have no problem issuing shares if your stock is fully valued.  I think our stock actually, measured against book value which many people do and is not a crazy way to measure it, it’s at the low end … so I hate issuing shares.  And if I’m paying $100 a share to Burlington shareholders, it’s costing our shareholders more than $100 which I will explain to them in the annual report, because we’re using shares I don’t want to use.

Now, this deal still makes sense in our view.  I mean, we talk about this extensively at the Board.  But we value Berkshire [shares] that we’re giving out at what we think Berkshire is worth.  Unfortunately the Burlington shareholder is going to value it at the market, so we have to give them $100 worth.  Weighing all of that, we like the deal.  But we don’t salivate over it.  I mean, it was close.  We wouldn’t have issued any more shares than we’re doing.

To view the interview, click on the image displayed below or on this link. 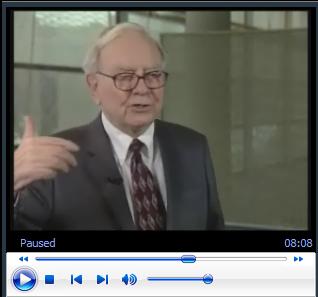 For RSS Feed subscribers, click on this link for the interview.

Buffett on Berkshire’s Valuation: It’s at the Low End