Berkshire Hathaway and The Lubrizol Corporation have announced a definitive agreement for Berkshire to acquire 100 percent of outstanding Lubrizol shares for $135 per share in an all-cash transaction.  The transaction, announced before the start of trading on Monday, March 14, represents a 28 percent premium for shareholders of Lubrizol in a transaction worth $9.7 billion including the assumption of $0.7 billion in net debt.  The transaction comes two weeks after Berkshire Hathaway Chairman and CEO Warren Buffett indicated that his “elephant gun has been reloaded, and my trigger finger is itchy.”

Looking for Elephants, Found a Zebra …

While the Lubrizol acquisition will represent one of the largest transactions in Berkshire’s history, it is a far smaller deal than last year’s acquisition of Burlington Northern Santa Fe and may be characterized as more of a “zebra” than an “elephant”.  The acquisition was likely in the works prior to Friday’s massive earthquake and tsunami in Japan.  While reports of insurance industry loss estimates have varied widely in recent days, apparently Berkshire’s exposure through its reinsurance subsidiaries was not significant enough to impact the Lubrizol acquisition.

Despite periodic catastrophes, even on a massive scale, Berkshire certainly has ample cash to fund the Lubrizol transaction based on a cash balance of over $38 billion at the end of 2010, of which nearly $35 billion was held outside the company’s regulated utility and railroad business.  In addition, Berkshire will probably receive nearly $9 billion in additional cash later this year when Goldman Sachs and General Electric are expected to redeem the investments Berkshire made during the dark days of the financial crisis in October 2008.  In his 2010 letter to shareholders, Mr. Buffett stated that Berkshire has pledged to hold at least $10 billion of cash at all times.

In this article, we will take an initial look at Lubrizol’s business based on recent SEC filings, company presentations, and other information located in the hours since the transaction was announced.  Our initial impression is that Lubrizol appears to have many of the economic characteristics that Warren Buffett is known to look for, particularly related to pricing power in an inflationary environment.  However, we note that Lubrizol has experienced significant margin expansion in recent years that must be sustained in order to result in the financial performance that Mr. Buffett is probably expecting. 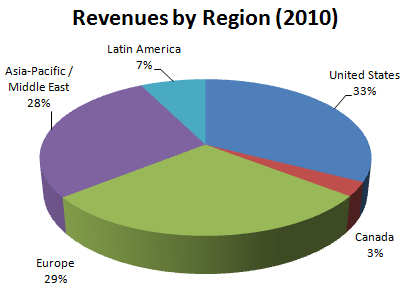 The Lubrizol Corporation, founded in 1928, is a specialty chemical company that supplies technologies intended to improve the quality and performance of customers’ products in transportation, consumer, and industrial markets.  The company posted revenues of $5.4 billion in 2010 operating in two segments:  Lubrizol Additives and Lubrizol Advanced Materials.  The company generated over 67 percent of revenues outside the United States in 2010.  Over the past five years, over fifty percent of Lubrizol’s revenue growth was driven by gains in the Asia-Pacific/Middle East region which now accounts for 28 percent of revenue as shown in the nearby exhibit.

Lubrizol derives 72 percent of revenues from the Additives segment which produces engine and driveline/industrial additives designed to improve the performance of vehicles, equipment, and machinery.  The Advanced Materials segment accounts for 28 percent of revenues and produces chemicals used in specialty plastics, consumer goods, personal care and pharmaceutical products, and emulsions and additives for industrial coatings and inks.  Lubrizol’s customers include major global and regional oil  companies, refineries, and specialized lubricant producers as well as builders, contractors, and architects.

In order to compile an initial financial overview of Lubrizol, we gathered five years of financial data based on the company’s 10-K filings and other information on the Lubrizol website.  This process was approached much like any other research project, but with the emphasis on which characteristics of the business may have attracted Warren Buffett’s attention.  When we examine the financial for the past five years, it is apparent that Lubrizol navigated the recession quite well given the fact that many of the company’s customers are in highly cyclical industries.  Although revenues declined by almost 9 percent in 2009, Lubrizol’s cost of sales declined even more quickly resulting in significant margin expansion and a dramatic increase in profitability.  The margin improvement expanded further in 2010.  The exhibit below shows the key metrics we focused on in our analysis:

In the segment analysis section below, we will drill into the question of margin sustainability in more detail.  For now, we note that net margin as adjusted (a non-GAAP figure) has averaged 8.4 percent over the five year period presented above.  In terms of forecasting normalized earnings, the analyst must make a determination regarding the sustainability of margins.  Based on a $9.7 billion purchase price, it appears that Berkshire is paying slightly over 13 times net trailing earnings for Lubrizol.  However, if normalized net margins prove to be 8 percent rather than 2010’s 13.7%, the effective trailing P/E based on normalized earnings would be over 22.

In the discussion below, we will briefly discuss each of Lubrizol’s reporting segments and comment on historical margins, management’s statements on pricing power, and implications for the business going forward. We will also look at segment capital expenditures and depreciation.

The additives segment accounted for 72 percent of revenues and 81 percent of operating income in 2010.  The company’s latest 10-K and website has much information on the nature of the products which we will not repeat here.  From an economic standpoint, we found a slide from a recent company presentation (pdf) quite interesting and it is reproduced below: 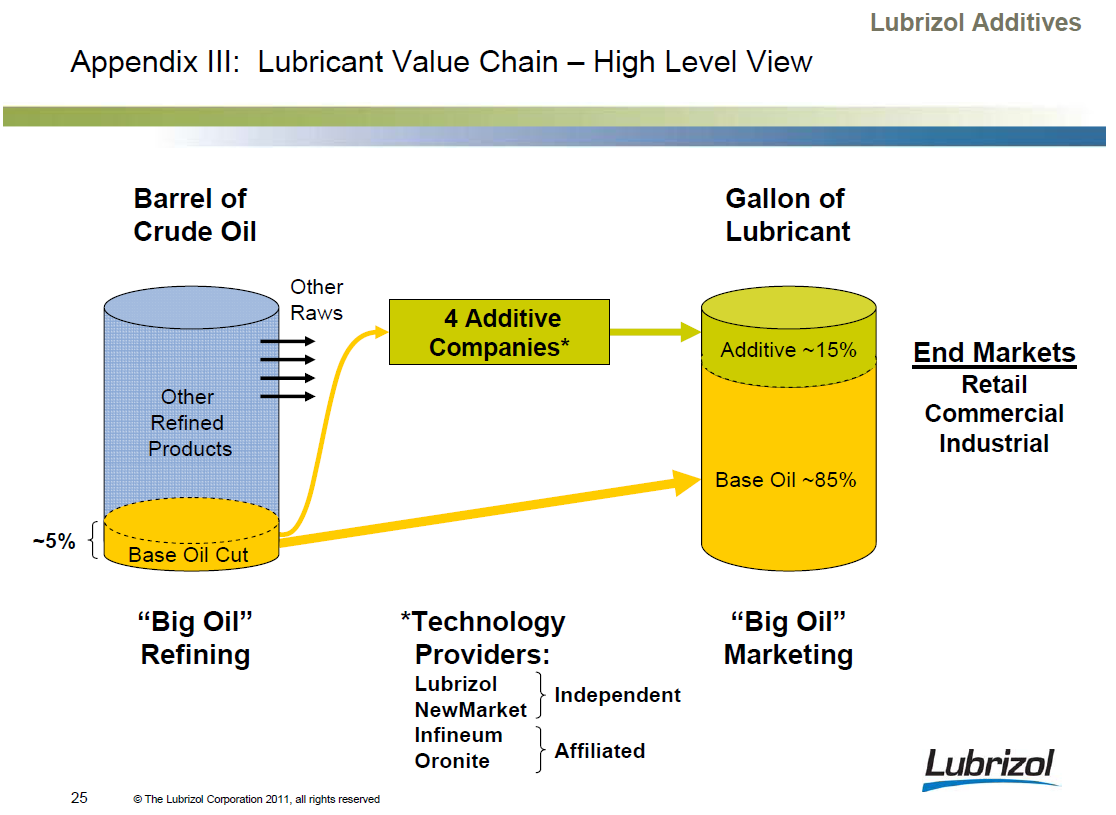 The slide does a good job of illustrating Lubrizol’s role in the value chain as well as highlighting the competitive landscape (Infineum is a joint venture of ExxonMobil and Shell while Oronite is a Chevron subsidiary).  The engine and driveline additives produced by Lubrizol represent a small percentage of the lubricant sold by volume to end customers and the industry only has a few competitors, with Lubrizol’s management claiming to have the leading technology.  The importance of lubricant and fuel additives in terms of equipment performance and reliability, not to mention the cost of failure if appropriate additives are not used, presumably gives Lubrizol pricing power when it comes to passing along raw material costs to end markets.

The issue of pricing power was a frequent topic during the company’s recent conference call (pdf, transcript) in which management discussed 2010 results.  Pricing power likely represents a major reason behind the margin expansion experienced over the past two years and may bode well for maintenance of the improved margins going forward.  The exhibit below provides selected data on the additives segment: 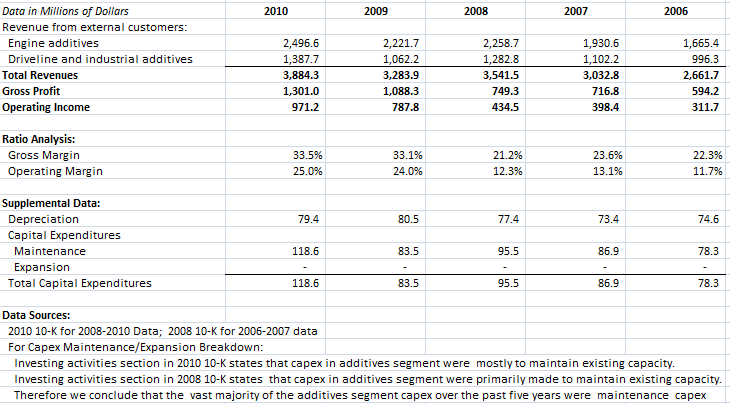 Gross margins expanded from 22.3 percent in 2006 to 33.5 percent in 2010 with operating margin expanding from 11.7 percent to 25 percent.  During this period, the company adequately funded maintenance capital expenditures although management has indicated that a major new production facility in China will require significantly higher capital expenditures over the next few years.

Lubrizol Advanced Materials provided 28 percent of company revenues and 19 percent of operating income in 2010.   While gross margins are comparable to the additives segment, operating margins are substantially lower.  The exhibit below shows key data for the segment over the past five years: 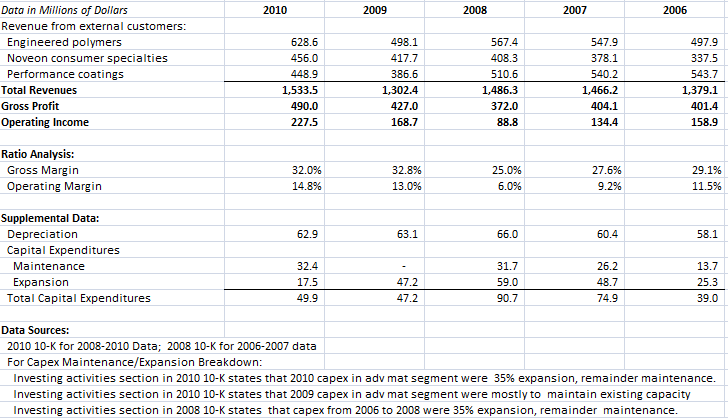 Management is bullish on prospects for expanding operating margins for the advanced materials segment as the business grows and additional economies of scale are achieved.  Lubrizol Chairman and CEO James Hambrick made the following comments on this topic during the company’s 2010 conference call (link to transcript provided above):

When you look at the unit margins, the average unit margin of the Additives portfolio and the average unit material margin of the Advanced Materials portfolio, you will see that those segments are very similar. They are almost identical. But the economy of scale, the relatively smaller size of the Advanced Materials businesses mean that as you come down the P&L to the gross profit line and ultimately to the operating income line, they diverge. As the Advanced Materials businesses grow and they grow at a higher rate than the Additives business, they will gain that economy of scale and those margins, those operating margins will naturally rise and that will naturally bring up the overall consolidated. And so that has been the nature of my thrust to grow those businesses and build that scale to about $1 billion in each one of those sectors in order to accomplish that.

Based on the past five years, Advanced Materials is actually growing at a slower pace than Additives, but management appears to think that the growth rate of Advanced Materials will soon accelerate.  If this occurs and the hoped for economies of scale materialize, overall company operating and net margins could be boosted further.

Warren Buffett was likely attracted to Lubrizol based on the company’s strong free cash flows in recent years.  Management has basically funded only slightly more than basic maintenance capex over the past five years, pursued a few acquisitions, and aggressively repurchased shares.  The exhibit below shows Lubrizol’s depreciation, maintenance, and expansion capex over the past five years: 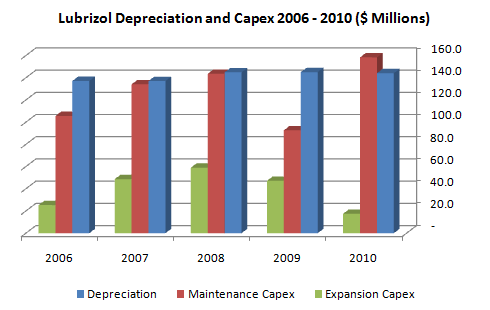 The exhibit below shows depreciation, capital expenditure, free cash flow, and deployment of cash over the past five years: 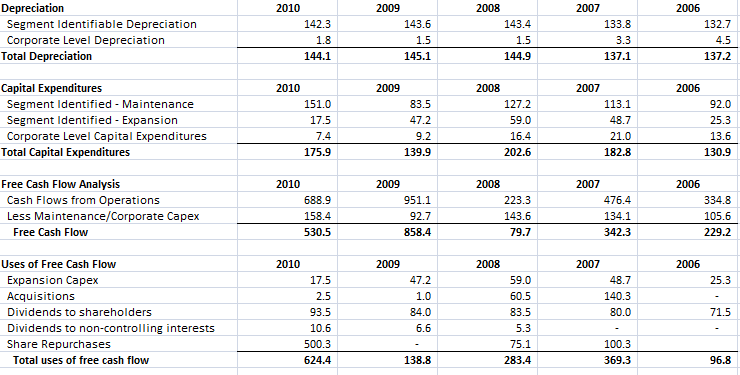 From Berkshire Hathaway’s perspective, the free cash flow available after funding maintenance capital expenditures can be deployed either internally within Lubrizol or toward other acquisitions or investments in marketable securities.  We can see that Lubrizol has been providing substantial free cash flow over the last two years which has facilitated an aggressive buyback program and modest expansion capex.  Berkshire is likely to continue with Lubrizol’s plans for a major expansion of the Additives segment in China given the attractive economics of the region.

While revenues in the United States and Canada have stagnated in recent years, Asia-Pacific/Middle East sales have soared by 86 percent. Europe has also seen healthy revenue growth over the five year  period.  While Lubrizol currently hedges currency risk, this policy could conceivably be changed going forward and would result in increased currency diversification for Berkshire Hathaway, a goal that Mr. Buffett may have in mind given his recent comments on prospects for higher inflation in the United States.

While this article is not an exhaustive valuation or overview of Lubrizol’s business, we hope that it has introduced readers to the company and hopefully provided some insight into aspects of the business that may have attracted Warren Buffett’s attention.  It does not appear that any impediments will emerge between now and the anticipated close of the transaction in the third quarter.  In fact, buyers of Lubrizol stock at today’s close will only receive a meager 24 basis point return between now and the transaction close signaling significant certainty with respect to the deal going through.

In the coming weeks and months, we will more closely follow developments at Lubrizol and study the competitive environment surrounding the company’s product lines.  It is likely that Mr. Buffett may answer questions regarding the acquisition at the upcoming Berkshire Hathaway annual meeting on April 30.  We believe the key driver behind the success of the acquisition will involve the sustainability of the recent margin expansion over a full economic cycle.  Presumably, Mr. Buffett expects maintenance of the improved margins since reversion to prior levels would make the $9.7 billion purchase price appear to be on the expensive side.