In 1984, Warren Buffett gave a presentation at Columbia University to commemorate the 50th anniversary of Security Analysis.  In The Superinvestors of Graham-and-Doddsville, Mr. Buffett made the case that the intellectual foundation provided by Benjamin Graham represents the common thread behind the incredible long term performance of a group of investors who operated in very different ways.  The investors varied greatly in terms of the type of investments made, degree of diversification used, and methods of finding ideas but they all shared in common an approach grounded in value investing principles.

Following the moves of famous investors has become a common source of idea generation for today’s investors.  Although many investors attempt to mechanically “coattail” the moves of various hedge fund managers based on quarterly SEC filings, it is more productive to attempt to identify those investors with strong long term track records and to learn from their investment philosophy. 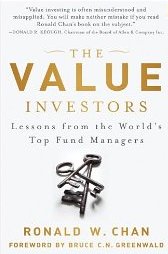 Ronald W. Chan’s latest book, The Value Investors:  Lessons from the World’s Top Fund Managers, is an excellent compilation of interviews with twelve highly successful value investors from very different backgrounds.  Mr. Chan’s previous book, Behind the Berkshire Hathaway Curtain, which we reviewed in 2010, demonstrated his mastery of the art of the interview.  Each of the chapters in The Value Investors includes a brief section with biographical information regarding the manager along with his long term track record relative to an appropriate benchmark.  The managers interviewed are:

One of the notable aspects of the list chosen for the book is the fact that these investors not only have varying methods of identifying investment ideas but also come from different cultures and operate in different parts of the world.  The important commonality is the fact that each of the investors has adopted Benjamin Graham’s principles as the foundation of their investment approach.  This does not mean that each of the investors uses the same formulas or approach.  They each have adapted the Graham principles and combined them with their own backgrounds, circle of competence, and temperament to come up with an approach that works.

It is also striking how several of the investors have incorporated views of the macroeconomy in their investment thinking while others have not.  There are few topics as controversial as whether a value investor should pay attention to macroeconomic factors as part of the investment process.  The question is not whether one should buy or sell stocks simply because of fears of recession, inflation, or turmoil in Europe.  The issue is more related to whether broad expected trends should play a role in the types of sectors and companies one researches at any given time.  Obviously, it is preferable to have macroeconomic tailwinds working in one’s favor rather than always battling headwinds.  However, it is less clear whether most investors have the ability to accurately identify headwinds and tailwinds in advance.  Reading some of the views provided in the book can help to cast light on this topic.

Perhaps the most important interview in the book is presented in the first chapter.  Walter Schloss was interviewed for the book a few months before he passed away on February 19, 2012 and the views he provides reflect the wisdom gained over a long and successful life.  Mr. Schloss, who had been managing money for decades by 1984, was also one of the investors Warren Buffett discussed in The Superinvestors of Graham-and-Doddsville.

Walter Schloss continued to outperform the market until his retirement in 2002 posting a cumulative return of 16 percent annualized (21 percent before fees) versus an annualized return of 10 percent for the S&P 500 over the course of his career.  A $10,000 investment made in 1956 would have compounded to nearly $11 million by 2002.

Mr. Schloss managed to compound money at astonishing rates for decades by studying the Value Line Investment Survey and investing broadly in a portfolio that often included over one hundred stocks.  This approach is quite different from the other investors profiled in the book many of whom advocate speaking to management and running more concentrated portfolios.  For more insights directly from Mr. Schloss, we highly recommend viewing a lengthy interview recorded by the Ben Graham Centre for Value Investing in February 2008.

Intelligent investors should attempt to learn vicariously through the experience of those who have succeeded in the field.  We highly recommend Mr. Chan’s latest book which makes this process enjoyable and informative.

Disclosure:  The Rational Walk received a review copy of the book from the author.