The more things change, the more they stay the same.  One of the realizations that comes only with life experience is that the trials and tribulations one faces are not so different from those that were experienced by past generations and will likely trouble future generations.  The quote above is twenty years old but has just as much resonance today as it did in 1996, and perhaps even more.  Boards are still fond of elaborate strategic plans and executives still justify poor decisions based on the political cover afforded by such plans. 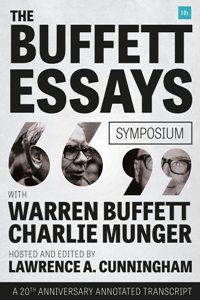 Although this post was not timed to mark the exact anniversary, it so happens that a two day symposium to discuss Warren Buffett’s letters to shareholders began exactly twenty years ago on October 27, 1996, apparently one day after the Yankees won the World Series.  Lawrence Cunningham organized the symposium to launch The Essays of Warren Buffett:  Lessons for Corporate America, which we briefly reviewed over seven years ago.  The Buffett Essays Symposium is an annotated transcript of the conference in which we can see how Warren Buffett and Charlie Munger interacted with a number of audience members including Bill Ackman and Bruce Berkowitz.  Far from being an audience of nodding sycophants, we see various individuals challenging Mr. Buffett’s assumptions in certain cases and openly debating important topics such as corporate governance.  Current commentary helps to put the discussion in context for readers.

The symposium was organized into four panel discussions covering corporate governance, finance and investing, mergers and acquisitions, and accounting and taxation.  The introduction to the book provides background information on Mr. Buffett’s views on each of the panel topics and also discusses events that have taken place since the symposium.  The format of the discussions resembles the Berkshire Hathaway annual meeting Q&A session but appears to have more of a give-and-take atmosphere.  The transcript is a very enjoyable read.  What follows are a few excerpts from each of the panel discussion topics that seem particularly interesting and remain highly relevant to investors today.

Warren Buffett’s commentary on the politics of acquisitions might sound applicable to those who have been observing recent merger and acquisition activity:

There are psychic benefits to an executive of running a bigger show or just having more action or whatever that can be in conflict with the shareholders, even though that executive may be first class in other respects.  The nature of acquisitions is that they get to the board at a point where if you turn them down you are rejecting the chief executive, you are embarrassing him in front of his troops, you’re doing all kinds of things.  So, it just doesn’t happen.

I have seen board after board approve deals that afterwards the board members say, “you know, I really didn’t think it was a very good idea but what could we do about it?”  And there should be a better mechanism.  But I’m not sure what it is.  There should be a better mechanism, though, for a board to make those important decisions where a first class chief executive can have an absolutely different equation than the shareholders, weighing all of the personal economic and non-economic considerations.

There should be a mechanism that enables the board to bring independent judgment on those in a way that doesn’t put the CEO in a position virtually where he or she has to resign or is embarrassed in front of the troops.  And I would welcome any discussion on those matters.

There was subsequent discussion regarding this topic but, perhaps unsurprisingly, no major insight emerged regarding how to address these problems which remain intractable to this day.

The question of whether Berkshire Hathaway should pay dividends is not new.  Even in the mid-1990s, this question was regularly discussed by Berkshire investors and considered by the company’s board.  Over the next ten years, Berkshire is very likely to face a situation where capital must be returned to shareholders either via dividends or share repurchases.  In this context, the following exchange between Warren Buffett and Charlie Munger is of particular interest:

MUNGER:  (In response to a question from a panel participant regarding Berkshire’s dividend policy):  We told you when we will do that.  That’s in all the Buffett letters.

BUFFETT:  If it translates into more than a dollar of market value then they have the option of taking the full dividend out and getting more than the dollar than they would have gotten if we sent it to them directly to use in whatever opportunity is available to them.

MUNGER:  The break point that I couldn’t get from my question, we’ve given in Berkshire’s case.  We say our break point is when we get so we can’t deliver more than a dollar of market value per dollar retained, we will start distributing the money to the shareholders instead of retaining it.  That’s our break point.

BUFFETT:  We might distribute more than 100% of the earnings.

In recent years, there has been some controversy regarding whether Berkshire Hathaway has met the retained earnings test, the specifics of which have been revised since they were initially laid out in letters to shareholders.  In the coming years, Berkshire’s size will reach the point where reinvestment opportunities large enough to soak up all the free cash flow each year will become very rare.  At that point, the question will not be whether Berkshire should return cash to shareholders but rather whether dividends should be paid or shares repurchased instead.

Warren Buffett is asked a question regarding the wedge between intrinsic value and negotiated value in a merger or acquisition scenario:

But the intrinsic value is if the company itself were a bond and you could see all the coupons printed out between now and judgment day, if you discounted those back at government bond rates since you would know the certainty, the same certainty that you would have on a government bond what that number would be.  Those numbers differ.  I would say that now negotiated values on balance relative to intrinsic values are probably higher than they were ten or fifteen years ago, but that’s just a function of the different kind of environment we’re in.  They move around a lot over time.

Note what Mr. Buffett said about discounting back the company’s “coupons” at government bond rates.  Twenty years ago, the ten year government bond yield was approximately 6.5 percent compared to the current ten year yield of 1.8 percent.  The mathematics of discounting future cash flows makes it obvious that using today’s lower government rates would result in dramatically higher “intrinsic values”, all else remaining constant.  However, the degree to which one should use today’s abnormally low yields without some adjustment for future normalization is a subject of debate among investors.

The popularity of “adjusted” earnings presentations is probably greater today than at any time since the dot com boom of the late 1990s.  The environment for creative accounting in 1996 had not yet reached peak bubble levels when Warren Buffett made these comments in a panel discussion that included Lou Simpson:

In certain kinds of markets — including in the late 1960s for sure and maybe some more recently — there is a feeling among people who are either very smart or cynical that they would rather buy into manipulated earnings than real earnings because there is more certainty of manipulated earnings coming through on target for some time and they will get out before it all collapses.  There are people who think it is rational to play along with a game that isn’t going to be discovered until they are out of it.  I would say that I agree with Lou [Simpson] practically all the time, but a lot of money can change hands during the period of manipulation before it eventually tarnishes the reputation of the National Student Marketings of the world.

A biblical reference seems to be a fitting way to conclude:

What has been will be again, what has been done will be done again; there is nothing new under the sun.