Is it possible to reliably identify great managers and their companies at an early stage and enjoy compound annual returns of twenty or even thirty percent over many decades?  We recently explored this subject in some detail using Berkshire Hathaway and Markel Corporation as relevant examples and concluded that it would have been very unlikely for an enterprising investor to have identified these companies at early stages of development:

In 2016, there is no doubt that there are companies one could invest in on the ground floor that will become phenomenal success stories in the decades to come.  There is substantial doubt that investors will be able to identify those companies.  However, today there are many candidates for investment where the companies are already well under construction and we can get in on a higher floor.  Markel is just one possible example.  Such investments may not realize 20 percent compound annual returns over 50 years but, for most people, far more modest compound returns are perfectly adequate to meet personal objectives.

This attitude might strike some readers as somewhat defeatist.  After all, even if getting in at a “higher floor” is a more reliable way to compound wealth at “reasonable rates of return”, those who can get in on the “ground floor” of truly outstanding companies have the opportunity to amass enormous fortunes at “unreasonable rates of return”.  Even those who are not attracted to the idea of an enormous fortune to facilitate personal consumption might be motivated by opportunities to leave a legacy to loved ones or to fund charitable causes.  Why not endeavor to find the truly outstanding opportunities if there are reliable ways to identify such companies in advance? 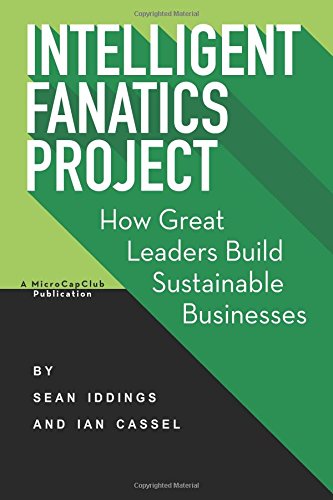 Charlie Munger came up with the term “intelligent fanatic” to describe individuals with large ideas and a fanatical drive to build sustainable competitive advantages over time.  These are precisely the type of individuals most likely to found companies that deliver amazing results over many decades.  Ian Cassel, founder of MicroCapClub, seeks to find great companies at an early stage of development.  Mr. Cassel, along with co-author Sean Iddings, recently published Intelligent Fanatics Project, a book that attempts to help readers find intelligent fanatics at an early stage by providing case studies of known intelligent fanatics who have already succeeded in compounding wealth at high rates over many decades.  By studying the past and the common elements and themes that have helped these intelligent fanatics succeed, investors may be able to spot the next big thing and get in on the “ground floor”.

Obviously, these case studies represent a wide range of industries and date from the 19th century to the present day.  Several of the cases involve individuals who are probably not as well known to investors today compared to the case studies in The Outsiders.  In particular, many readers will not be familiar with John Patterson, Simon Marks, and Chester Cadieux and will learn quite a bit from these profiles.  The profiles are not necessarily restricted to companies that were publicly traded, at least not for the entire career of the executive, and in many cases make certain inferences regarding returns to shareholders based on the information that is available.

The example that is probably most interesting to many readers is the chapter on 3G Partners because the formula for success developed by Jorge Paulo Lemann is currently being used to generate value in partnership with Warren Buffett’s Berkshire Hathaway.  Furthermore, the approach used by 3G is quite different from the more organic growth model used by the other intelligent fanatics.  Specifically, 3G seeks to acquire businesses that are either poorly managed or at least sub-optimally managed, and to then put in their system to extract value:

” … most intelligent fanatics would never attempt to acquire a large, bureaucratic competitor.  For instance, when Ken Iverson was asked, “If you were put in charge of U.S. Steel, what would you do?,” he answered, “I’d put a bullet in my head.”

The opposite has been true with the 3G partners, who purposely seek out poorly managed businesses with established brands and market presence.  They incorporate their tried-and-true leadership system, using an internally developed manager, to create a high-performance culture.  For instance, 3G partner Marcel Telles left his position at Garantia to become CEO of Brahma.  The first piece of advice that he received was from a friend, who said, “Marcel, congratulations! Now buy the aspirin factory, too, because Brahma causes huge headaches.”  But Marcel was looking for the opportunity to inject the Garantia model into the sleeping giant.”

Does this sound at all like Warren Buffett’s method of operation?  Of course not!  Mr. Buffett only acquires businesses where excellent economics and management are already in place and loathes cases where he must replace existing management or interfere in any way.  Yet Mr. Buffett has made a very significant bet on partnering with 3G as operating managers for Kraft Heinz.

Readers will be interested in the history behind Jorge Paulo Lemann’s founding of Garantia, a brokerage firm modeled after Goldman Sachs’s meritocratic culture.  Garantia was extremely successful in Brazil and eventually produced so much cash that, if distributed, would likely have removed incentives for partners to continue working.  Mr. Lemann instead began investing Garantia’s cash in other businesses.  The second business he took control of was Brahma, a brewer which morphed into AmBev with the acquisition of Antarctica in 1999, into InBev with the acquisition of Interbrew in 2004, and finally into AB InBev with the mammoth acquisition of Anheuser-Busch in 2008. The amazing story behind how Brazil’s number two beer company transformed into the largest beer company in the world is alone worth the price of the book.

Ultimately, the real question for investors is whether intelligent fanatics can be identified in advance, not years after their outstanding records have already been established.  One can achieve satisfactory results by getting on board at a more mature phase of a company’s development but it is the early years that usually provide the lollapalooza effect often discussed by Charlie Munger.  The authors believe that intelligent fanatics can be identified in advance and they make claims in each of the case studies regarding when it would have been clear that a manager is unique and what kind of returns investors could have achieved since that clarity became apparent.  They also include a final chapter describing the characteristics one should look for when searching for intelligent fanatics at an early stage.

All of this is very interesting and, in many ways, highly compelling.  We all want to find ways to compound wealth rapidly and the outstanding track records achieved in the past taunt those of us who have purposely settled for less by getting on board with companies at later stages of development.  One of the persistent issues and criticism facing books like The Outsiders and Intelligent Fanatics Project is that there is an inevitable degree of survivorship bias at work when we study those who have been successful but do not examine, with equal intensity, those who appeared to share the same characteristics but subsequently failed.  Is it not possible that there were many managers who initially succeeded and shared many of the same attributes of those in these books but ended up either failing completely or falling into mediocrity?  Books of this type would be strengthened by examining such examples in some detail and trying to identify what might have been different in cases of failure, even when the conditions and personalities necessary for success appeared to be in place.

There is never any harm in studying business success and Intelligent Fanatics Project certainly delivers in its attempt to provide interesting examples and to inspire readers to aim high when looking for new opportunities.  Enterprising investors will want to pay close attention to what has worked, even as they also invert and study what has failed to work.

Disclosure:  A review copy of the book was provided to The Rational Walk LLC free of charge by the authors.