Berkshire Hathaway: The Next Ten Years

Berkshire Hathaway is expected to report 2015 results on February 27 along with Warren Buffett’s annual letter to shareholders.  Mr. Buffett’s practice of releasing the report on a Saturday morning is intended to promote greater thought and reflection on the part of shareholders compared to a more typical release during the business week.  Our basic recommendation regarding how to read the report remains unchanged.  However, this year, shareholders should devote special attention to how Berkshire might evolve over the next decade.

A Company Transformed — Every Decade

Most observers tend to look at the evolution of a company on a year-to-year basis but when doing so we must remain aware of the fact that a 365 day cycle is actually a very short period of time.  If one were to instead look at Berkshire Hathaway in decade-long increments, the changes over time are far more apparent and dramatic.  For example, it is interesting to note that Berkshire’s retained earnings account increased from $47.7 billion at the end of 2005 to $163.2 billion at the end of 2014.  Over seventy percent of the earnings retained by Berkshire Hathaway throughout its history were generated during the last ten years.

The exhibit below presents the components of Berkshire Hathaway’s shareholders’ equity from 1994 through the third quarter of 2015.  The snowball effect of earnings retention over time becomes readily apparent as a byproduct of overall business success and Berkshire’s policy of retaining nearly all earnings.  Over this timeframe, Berkshire has only repurchased an immaterial number of shares. 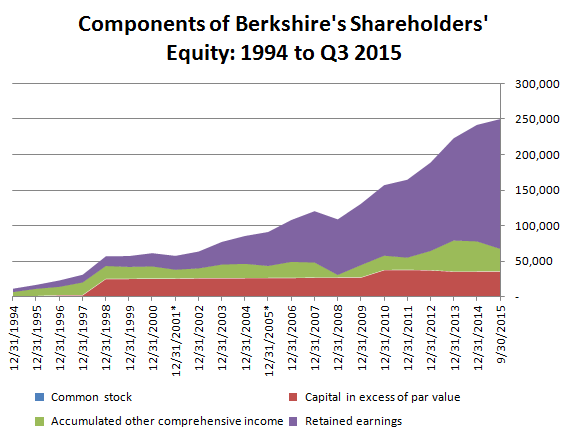 As of September 30, 2015, Berkshire’s equity stood at $248.3 billion, with 73 percent of the total represented by retained earnings.  While extrapolation of past results is always a hazardous endeavor, the widely diversified, high quality nature of Berkshire’s business units makes it probable that the snowball of earnings will continue to grow over time.  If Berkshire continues to retain all earnings, it is highly likely that additional subsidiaries will be purchased and existing subsidiaries will expand.  Berkshire could also choose to reinvest earnings in marketable securities.  The size of Berkshire’s marketable securities portfolio (including cash) has nearly doubled over the past decade.

The Numbers Have Become Too Big

In last year’s annual letter to shareholders, Warren Buffett warned that Berkshire’s results in the future will not come close to those achieved over the past fifty years.  This reality has been obvious to most observers for quite some time.  The numbers are simply too big and the snowballing nature of compounding makes it more difficult to fully redeploy Berkshire’s earnings every year.

Mr. Buffett also made an important prediction regarding Berkshire’s ability to reinvest earnings:

Eventually – probably between ten and twenty years from now – Berkshire’s earnings and capital resources will reach a level that will not allow management to intelligently reinvest all of the company’s earnings. At that time our directors will need to determine whether the best method to distribute the excess earnings is through dividends, share repurchases or both. If Berkshire shares are selling below intrinsic business value, massive repurchases will almost certainly be the best choice. You can be comfortable that your directors will make the right decision.

However, note Mr. Buffett’s warning in the quote above:  Berkshire is unlikely to be able to continue internal redeployment of retained earnings for more than a ten to twenty year period.  When redeployment of capital within Berkshire is no longer possible at attractive rates of return, Berkshire will have to return capital to shareholders.

There are reasons to believe that Berkshire will likely return capital to shareholders sooner rather than later.  The scale of the problem discussed above makes it clear that enormous amounts of capital will have to find a new home within Berkshire in the coming years while continuing to generate attractive rates of returns.  As the sums become larger, the task of reallocation becomes much harder.  In terms of purchasing wholly owned subsidiaries, Berkshire already has a much narrower universe of potential acquisitions compared to a decade ago.  While Berkshire could pursue smaller acquisitions under $10 billion, such deals are unlikely to “move the needle” overall.  Similarly, the universe of marketable equity securities that can have an impact is shrinking.  Only the largest companies in the world have enough shares outstanding for Berkshire to make purchases of reasonable size.

One additional factor is the length of Mr. Buffett’s remaining time at Berkshire.  This is obviously not a knowable factor at this point and Mr. Buffett at age 85 continues to run Berkshire and appears to be in excellent health.  Still, the probability of a man in his mid to late 90s running a company of Berkshire’s size and complexity is rather remote.  Shareholders should hope for the best but not necessarily count on it.  As long as Mr. Buffett is running the company, shareholders are likely to be content with large amounts of cash piling up on the balance sheet because they know that this represents “optionality” that Mr. Buffett can leverage using his unique skills and insight.  Regardless of who Berkshire’s next CEO might be, shareholders are probably not going to be as content if large cash balances pile up earning nominal (or perhaps negative) interest rates.

Shareholders should always focus on the future when reviewing annual reports. This is not always easy to do given the fact that reports are naturally backward looking.  What will Berkshire Hathaway look like in ten years?  If all earnings continue to be retained and deployed well, we will be looking at a company with $600-700 billion in shareholders’ equity and a market value that could be approaching $1 trillion.  Such a company would resemble something far different from the Berkshire of 2016.  Shareholders should think about how this would materialize and consider the probability of achieving this kind of outcome.

The alternative to continued retention of all earnings is not a catastrophe.  It simply means that Berkshire will have to return cash to shareholders in some form.  Berkshire could either repurchase shares or pay cash dividends.  Due to Berkshire’s self imposed limit of 1.2x book value for repurchases, it seems more likely that return of capital would come in the form of cash dividends unless the repurchase limit changes.

As Mr. Buffett’s statement above implies, “massive repurchases” would be an excellent choice if Berkshire shares are selling below intrinsic value.  However, most observers would agree that there is a large gap between the current 1.2x book value threshold and any multiple that would fairly represent intrinsic value.  If the threshold were raised to 1.5x book, Berkshire would probably have an opportunity to massively repurchase shares while not overpaying.  This would be a much more tax efficient outcome compared to cash dividends.

How the next ten years will develop is not something we can predict with any certainty.  However, the probability of return of capital during this period is not negligible and shareholders would be well served to consider how this would play out, particularly for those who have long held, low cost basis shares and are counting on continued tax efficiency from owning Berkshire.

Berkshire Hathaway: The Next Ten Years

Rational Reflections is a newsletter covering current events, investing, personal finance, philosophy, book reviews, and other topics of interest. Enter your email address below to join over 5,600 subscribers.