The nearly continuous rise in the stock market over the past five years has resulted in tough comparisons for many investors who measure their progress against benchmarks such as the S&P 500.  In a recent article, we pointed out that Berkshire Hathaway is nearly certain to fail the five year retained earnings test not because of poor performance in absolute terms but due to unfavorable comparisons with the S&P 500.  While the implications of failing the test are not entirely clear, a return of capital might be on the table in the near future.

Most discussions regarding a potential return of capital at Berkshire assume that distributions to shareholders would be in the form of a cash dividend.  Stock repurchases have been considered less likely primarily due to Berkshire’s self imposed repurchase limit constraining buybacks to levels below 120 percent of book value.

Berkshire announced the 120 percent limit on December 12, 2012 which replaced a prior authorization to repurchase shares at levels below 110 percent of book value which had been in place since September 26, 2011.  Berkshire shares have rarely traded below the published limits.  Over the 591 trading days since the September 2011 authorization was announced, Berkshire closed at or below the limit price on only ten trading days. 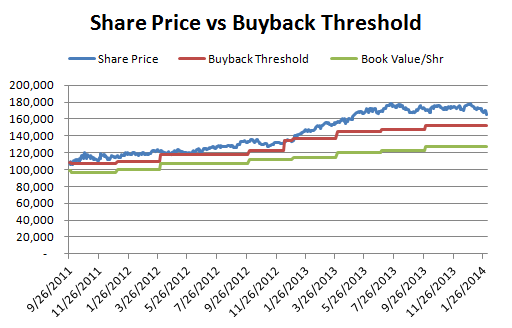 It is likely that Berkshire’s management uses the last published book value figure to calculate the buyback limit and then holds that limit constant until the next report released to shareholders.  This is despite the fact that book value is a dynamic figure that is constantly changing due to business operations and changes in the value of marketable securities.  Using an updated value during the quarter would defeat the main rationale of making Berkshire’s potential presence in the market for its own stock transparent to shareholders.  Therefore, we can assume that Berkshire is most likely using book value as of September 30, 2013 to set the threshold.  Book value as of September 30, 2013 was $126,766 per A share which would put the repurchase limit of 120% of book value at $152,119.

Berkshire’s Class A shares currently trade at about $165,000 which puts the price to book ratio at approximately 130 percent.  Based on the current limit, Berkshire would have to decline by another 8 percent to make a return of capital via repurchases a viable option.

Berkshire’s 2013 annual report will be released on February 28, 2014 and shareholders will have access to the book value figure as of December 31, 2013.  Presumably at that point, Berkshire will revise its repurchase limit to reflect December 31, 2013 book value.

While Berkshire’s book value is difficult to estimate due to the variability of earnings and the unpredictable marking of the derivatives portfolio, it is possible to make a ballpark estimate based on changes in the stock prices of Berkshire’s disclosed marketable securities holdings as well as an estimate of operating earnings based on recent trends.  Based on these factors, we would estimate Berkshire’s book value per A share to be in the vicinity of $132,000 as of December 31, 2013 which would put the new 120% repurchase limit at $158,400.  Berkshire would have to decline by only another 4 percent to reach that threshold.

It is important to separate known facts from inferences or speculation regarding what we do not know for certain.  It does appear almost certain that Berkshire will fail its self imposed five year retained earnings test.  We also know that Warren Buffett has pledged to not change the “yardstick”.  However, Berkshire has not spelled out precisely what actions would be taken in the event of falling short of the yardstick nor what the scale of the response will be.  We also do not know for certain what Berkshire’s book value was as of December 31, 2013.

Despite the unknown factors noted above, it does appear that a share repurchase becomes increasingly likely as Berkshire’s stock price falls.  We already know that Mr. Buffett considers 120 percent of book value to be a very good price for Berkshire shares and he didn’t hesitate to increase the limit from the prior 110 percent level when he had an opportunity to repurchase a block of shares in a private transaction in December 2012.  It is not inconceivable that the limit price could be increased again.

If Mr. Buffett intends to stick closely to the five year test and return some capital to shareholders, it seems likely that he is hoping that Berkshire stock falls to a level where he will feel comfortable repurchasing shares.  Returning capital only to shareholders wishing to depart is a more efficient way to handle this situation given the fact that a dividend would impact nearly all continuing shareholders negatively when it comes to tax consequences.

The bottom line is quite clear:  Long term Berkshire shareholders holding shares in taxable accounts should cheer for a ten percent decline in the shares which would place them at a level unambiguously below the current repurchase level.