Berkshire Hathaway traded in an extreme range on Friday, February 20, 2009 and closed at multi-year lows. I happen to consider Berkshire Hathaway to be severely undervalued and I will have more to say about valuation when the 2008 report comes out next week.  In the meantime, it is interesting to make a few observations regarding a remarkable arbitrage situation that persisted for most of the day and a record high closing discount on 30 B shares relative to one A.

One of the main principles of efficient markets is that it should be very difficult or impossible to take advantage of arbitrage situations.  Essentially this means that it should be very difficult to profit from price differentials between substantially identical securities.  With Berkshire Hathaway, we have something of a case study on this topic given that there are two series of shares that trade every day.  Berkshire Hathaway A shares are the original shares of the company while Berkshire Hathaway B shares were created in 1996 in an effort to thwart unit trusts that were planning to purchase the high priced A shares and offer slices to small investors (at a heavy fee, of course).

Berkshire A and B Class Shares:  Substantially Identical Securities

Berkshire issued B shares with 1/30 of the economic rights of an A share and 1/200 of the voting rights.  The details are outlined in this memo.  Any A share may be converted to 30 B shares at any time at the option of the A shareholder.  The reverse is not the case:  one cannot exchange 30 B shares for one A.

While 30 B shares are not precisely identical to 1 A share, they are substantially identical for any small shareholder who is unlikely to exert an influence from a voting perspective.  Still, there should logically be some small premium for A shares and it is reasonable to think that 30 Bs should sell at a minor discount to 1 A.

Arbitrage and the A/B Ratio:  Significant Spreads since October 2008

Given that the A and B shares have been trading now for well over a decade, it is interesting to look at trends in the ratio over certain time intervals and to see how the A/B ratio behaves during periods of market volatility and general irrational behavior on the part of market participants.  The following chart displays the A/B trend over the past year. As noted before, in theory, 30 Bs should trade at the level of 1 A, or at a slight discount: 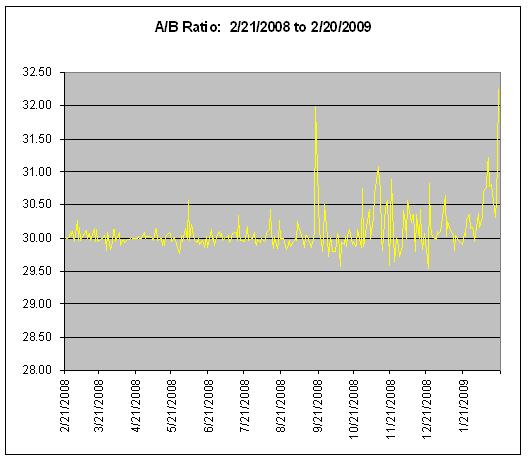 Taking the long view, one can see that normally, the spread is quite narrow, meaning that the A/B ratio is usually very close to 30.  In other words, most of the time, there seems to be little in the way of arbitrage opportunities given that the ratio often stays at the 30:1 level for months and even years at a time. 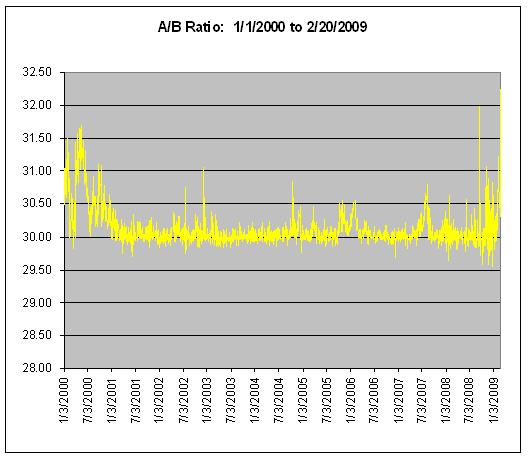 But Wait … We’ve Seen This Movie Before …

Looking at the one year chart of the A/B ratio from 2000, it is clear that scenarios similar to what we have seen over the past five months have taken place in the past.  The common thread seems to be that periods of high volatility in the markets and in Berkshire stock seem to be accompanied by seemingly irrational movements in the A shares relative to the B shares.

Given that the ratio as of today’s close was a record high at 32.26 B shares per 1 A, it seems prudent to look at the types of scenarios that have caused wide spreads in the past.  Consider that any A shareholder could have sold his or her A share and purchased 32 B shares and kept the change.  This is remarkable because 32 Bs have a significantly higher economic value than 1 A.  Although voting rights are substantially higher for the As, realistically, who is in a position to exert any influence over a company dominated by Warren Buffett and legions of loyal shareholders?

I suppose the larger point is why such anomalies could in fact exist for any length of time in an efficient market.  Could it be that emotions were running so high today that irrational selling pressure on the Bs relative to the As caused the large spread?

For the underlying data used in this analysis (courtesy of Yahoo Finance), please click on this link.