Berkshire Hathaway posted sharply higher operating profits (pdf) for the second quarter of 2010 thanks to strength in the insurance operations and major improvements in the company’s diverse collection of economically sensitive subsidiaries.  However, quarterly net earnings declined to $1.97 billion from $3.3 billion in the prior year period primarily due to losses in the derivatives portfolio caused by broad declines in market indices in the second quarter.  Book value per share declined to $86,661 per Class A share, down  3 percent for the quarter due to unrealized losses in Berkshire’s large portfolio of publicly traded stocks.

In this rather lengthy article, we will analyze Berkshire’s business performance in detail after a brief section on the distortion in Berkshire’s “headline earnings number” caused by the derivatives portfolio.  We also present a detailed trend analysis, including spreadsheets and graphs, of Berkshire’s results for the past ten quarters which reveals the progress of the business since the depths of the recession in early to mid 2009.

Derivatives – The Elephant in the Room

We have previously highlighted the dangers of focusing exclusively on the “headline numbers” regarding Berkshire Hathaway and cynics may believe that we are viewing the world (or at least Berkshire) through rose colored glasses. However, the reality is that Berkshire’s large portfolio of derivatives cause very wide fluctuations in net income each quarter because they are marked to market and the result flows through the income statement.  To argue that ignoring such movements in the short run is warranted is tantamount to making the same argument regarding broad moves in the equity market, and self evident to most value investors.

Unfortunately, for many market participants, short term is a few hours or overnight, long term is holding a position over a weekend, and a quarter is an eternity.  For such observers, all that matters is the loud headline stating that Berkshire’s net income dropped by 40 percent for the quarter.  Unfortunately, such myopia would conceal the underlying trends evident in the business.  We will again offer an analysis of Berkshire’s derivatives situation which may now be somewhat dated but still conveys the main points.

One new development regarding the derivatives portfolio appeared in Note 19 of Berkshire’s 10-Q filing (pdf).  In recent weeks, many journalists and other observers have claimed that Berkshire may face “billions” of dollars in collateral requirements due to the Dodd-Frank Act. Berkshire management disagrees:

Although the ultimate outcome of the regulatory rulemaking proceedings cannot be predicted with certainty, we do not believe that the provisions of the Reform Act that concern collateral requirements apply to derivatives contracts that were entered into prior to the enactment of the Reform Act, as ours were. As such, although the Reform Act may affect some of our business activities, it is not expected to have a material impact on our consolidated financial results or financial condition.

While the nature of the financial reform act is that it is a “work in progress” that will be fleshed out by regulators, it seems reasonable to accept management’s position at this time, while also keeping in mind that any future collateral requirement could be funded using securities in Berkshire’s existing portfolio that will continue to earn income for the benefit of Berkshire shareholders.

The insurance industry is known for going through periods of “hard” and “soft” markets in a somewhat cyclical pattern.  At times when overall industry capital is limited, pricing becomes “hard” and those insurers with capital are able to charge higher premiums.  During a “soft” market, plentiful capital leads insurers to compete for market share by offering lower prices.  The industry is currently firmly in the grips of a soft market which shows little sign of reversing.

Berkshire Hathaway Reinsurance Group posted a second quarter pre-tax underwriting profit of $117 million compared to a pre-tax loss of $318 million in the prior year period.  While overall premiums for the group increased due to the inclusion of a life and annuity business previously classified under Berkshire’s Finance and Financial products group, management sharply cut exposure to catastrophe and individual risk lines  due to inadequate pricing.  A major cause of the pre-tax loss in the second quarter of 2009 was due to a $417 million foreign currency translation loss in the multi-line business compared to a $47 million foreign currency translation gain in the second quarter of 2010.

Berkshire Hathaway Primary Group posted pre-tax underwriting profits of $48 million compared to $29 million in the prior year period.  While the group cut overall volume due to soft pricing, underwriting profits were boosted due to reductions in estimated prior years’ loss reserves in the medical malpractice business and better results in other business lines.

Warren Buffett has appeared increasingly bullish on the economy in recent months and now believes that a double dip recession is unlikely.  This is in marked contrast to his comments in mid 2009 stating that there were no “green shoots” in sight for the economy.  Where does Mr. Buffett get his insights on the economy?  Most likely from the weekly reports he receives on Berkshire’s diverse manufacturing, service, and retail businesses.   Examining second quarter results for this group explains his bullish sentiment.

A picture tells a thousand words, so in the interests of brevity, we present the following exhibit showing pre-tax earnings (in millions) for each of Berkshire’s major manufacturing, service, and retail businesses over the past ten quarters: 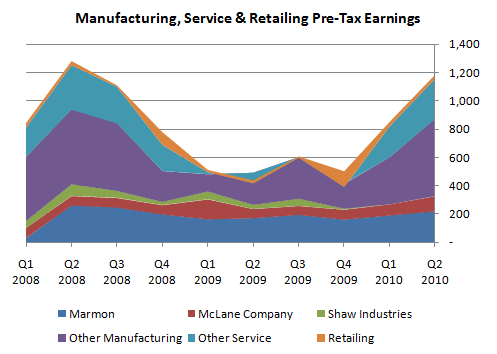 We can clearly see the impact of the recession on this group’s earnings power since the start of 2008.  While pre-tax earnings have yet to regain the level posted two years ago, the upward trend is evident particularly in the manufacturing and service segments.  Please note that starting in Q1 2010, Shaw Industries was absorbed into the “Other Manufacturing” group.  Also, note that Marmon was acquired on March 18, 2008 which accounts for the large jump in pre-tax earnings from Q1 2008 to Q2 2008.

To keep this article to a reasonable length, we will not detail the results of each group.  However, we must point out the dramatic recovery in NetJets which is included in the “Other Service” group.  For the first six months of 2010, NetJets posted pre-tax earnings of $114 million compared to a pre-tax loss of $349 million for the first half of 2009.  Revenues increased 16 percent and 17 percent for the first quarter and second half respectively over the same periods in the prior year.  Berkshire says that the result has been accompanied by “record customer satisfaction scores”.  The increasing revenues and high level of customer satisfaction further calls into question the motives of former NetJets employees who have been very critical of David Sokol’s leadership.

Effective January 2010, Berkshire also began to charge NetJets a guarantee fee related to its level of outstanding commercial paper and other borrowings.  For the first six months of 2010, this fee was $18.7 million and was charged against NetJets earnings;  in other words, first half pre-tax profits of $114 million was after payment of the new guarantee fee.  If Berkshire had imposed such a fee in the first half of 2009, pre-tax losses would have increased by $38.2 million.

Rumors and anonymous charges against Mr. Sokol may continue, but Berkshire Hathaway shareholders are already benefiting from the dramatic restructuring he has put in place, apparently with none of the dire consequences for customer satisfaction that were predicted by former employees.

The furniture and transportation equipment leasing group (CORT and XTRA) posted a slight decline in revenues for the quarter while posting sharply higher earnings.  However, for the first half, revenues were down by $28 million, or 8 percent, from the first half of 2009.  First half earnings were $15 million, up from $5 million for the prior year period due to cost control measures.

MidAmerican posted net earnings of $233 million for the second quarter of 2010 compared to $253 in the prior year period.  Earnings at PacifiCorp, MidAmerican Energy, the U.K. Utilities, and the real estate segments were up while the natural gas pipeline business posted a decline.  Comparisons were also negatively impacted by realization of $93 million of onetime gains associated with the Constellation Energy common stock investment in the second quarter of 2009.

While the “headline numbers” indicate a steep decline in profitability for Berkshire in terms of net income, careful investors should dig a bit deeper and examine the operating results for each of Berkshire’s main reporting segments.  Such an examination reveals an insurance business that is still posting significant underwriting profits despite a soft market environment along with a diverse collection of operating companies that have clearly emerged from the recession.  The spreadsheet listed in the resources section contains more details regarding Berkshire’s results over the past ten quarters.  For a longer range view of Berkshire’s business units, please refer to the data and analysis in The Rational Walk’s 2010 Berkshire Hathaway Briefing Book which was released in late February.