Last month, I wrote about potential opportunities to profit from pricing discrepancies between Berkshire Hathaway Class A and Class B shares.  While the arbitrage opportunity was reduced significantly by February 26, it has re-emerged again more recently.  If someone holding A shares decided to sell one A at the close this afternoon, he could have purchased 31.69 B Shares.  This is short of the record high figure of 32.26 on February 20, but still a historically wide spread.  The chart below shows the behavior of the A/B Ratio over the past three weeks. 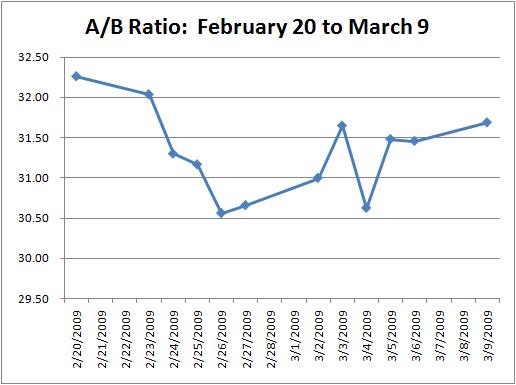 Click this link for closing prices for each class of stock during this 12 trading day period.

As I wrote last month, each Class B share has economic interests equivalent to 1/30 of each Class A share and voting interests equivalent to 1/200 of each Class A share.  While the power of Class B shareholders from a voting perspective is clearly inferior, most Berkshire shareholders would have no influence over corporate policy anyway given Warren Buffett’s personal holdings as well as shareholders who are very loyal to him.  Therefore, it seems logical that the B shares should trade very close to 1/30 of the A shares.

What could be causing the apparent arbitrage opportunity?  On February 23, I speculated that it could be due to buying interest from someone who did in fact have an interest in accumulating voting control.  This would have supported a theory that Berkshire was buying back stock.  Berkshire’s annual report released on February 28 would have revealed such a move, so this theory is most likely incorrect.

One other potential theory is that the B shares have been under pressure due to forced sales by the charities that hold shares donated by Warren Buffett.  The International Herald Tribune reported that the Gates Foundation has sold 36,056 Class B shares so far in 2009 to comply with tax laws.  When Warren Buffett made his pledge to the Gates Foundation (as well as family related foundations) in 2006, he pledged Class B shares.  Buffett would convert the Class A shares he owns into Class B shares prior to making the gifts, presumably to retain as much voting control over Berkshire as possible even while giving away a large percentage of his economic interest over time.  It is certainly possible that forced selling by the foundations could be depressing the Class B share price compared to where it would normally trade relative to Class A.