A quick look at the chart for Atwood Oceanics shows a familiar pattern for those who have been following the price action of companies in the offshore contract drilling industry.  Shares of Atwood have declined by approximately 30 percent from the trading levels that prevailed in the weeks prior to the April 20, 2010 Deepwater Horizon disaster.  However, Mr. Market is generally incapable of evaluating the details behind specific situations and appears to have unfairly discounted Atwood based on one surprising fact:  Less than two percent of the company’s revenues in the current fiscal year were derived from activities in the Gulf of Mexico.

As we have seen in our previous articles on Noble Corporation, Ensco, and Diamond Offshore, opportunities exist for investors who are willing to look past the emotional distress of Mr. Market and come to their own conclusions on valuation.  However, all three of the companies previously analyzed had at least some material activity in the Gulf of Mexico and one could plausibly argue that some impairment could exist going forward due to more onerous regulations.  The same cannot be said about Atwood due to the immateriality of the Gulf of Mexico to overall revenues and the fact that the one rig that Atwood operates in the Gulf is only rated for shallow water activity.

Atwood Oceanics is a relatively small player in the offshore contract drilling industry.  The company currently has a market capitalization of approximately $1.67 billion with tangible book value of $1.3 billion as of June 30, 2010.  The company operates nine drilling rigs comprised of five semisubmersible units designed for deeper waters along with three jack-up rigs and one submersible rig designed for shallow water drilling.  In addition, the company has two ultra deepwater semisubmersible rigs under construction and has been heavily investing in expanding capabilities for deepwater exploration. Those who are unfamiliar with the characteristics of different rig types are referred to our profile of Noble Corporation in which we explain the capabilities of each class of rig.

As we can see, Atwood’s financial results mirror the strong performance of other contract drillers over the past five years as the industry has benefited from relatively high dayrates that resulted from increased exploration activity due to robust oil prices.  Throughout this period, Atwood has been able to grow margins and has posted yearly advances in revenues and earnings per share.

While debt levels have  increased and now stand at $230 million as of June 30, leverage is still modest at 15 percent of capital.  Furthermore, interest service on the debt is currently modest due to the fact that the terms of both of the firm’s lines of credit are floating rate and currently have an average interest rate of under 2 percent.

The following exhibit lists the status of Atwood’s rig fleet as of September 1, 2010 (click on the image for a larger view of the data): 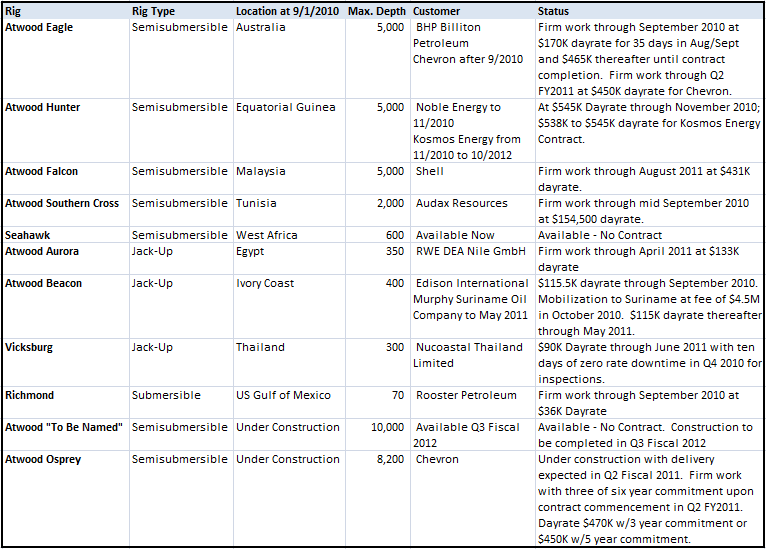 As we noted previously, only one of the rigs is currently located in the United States Gulf of Mexico and that rig is a submersible unit designed for operations in very shallow waters of up to 70 feet.  The Richmond rig is currently under contract with Rooster Petroleum through the month of September 2010 at a dayrate of $36,000.  Revenues for the Richmond rig were $8.6 million, or 1.8 percent of total revenues,  for the first nine months of fiscal 2010 due to downtime and required inspection activities.  Revenues for Richmond were $19.1 million, or 3.3 percent of total company revenues, for fiscal 2009.

The following exhibit presents selected operating data for fiscal years 2007, 2008, and 2009 as well as the first nine months of fiscal 2010.  While Atwood operates in one reporting segment, the company provides details regarding revenues, contract drilling costs, and depreciation for each individual rig.  This allows us to analyze operating profitability on a per-rig basis.  (Click on the image for a larger view of the data):

We can see that the majority of company revenues and profitability is attributable to the semisubmersible rigs capable of operating in deep waters.  The semisubmersibles capable of drilling in deeper waters appear to be the most profitable.  The company reported that the Atwood Southern Cross has had difficulty finding contracts and this can most likely be attributed to the rig’s relatively limited maximum water depth of 2,000 feet.  The company reports that there have been “virtually no drilling programs awarded over the last year for semisubmersible drilling units technically similar to the Atwood Southern Cross”.

The following chart shows revenues broken down by rig type for the first nine months of fiscal 2010: 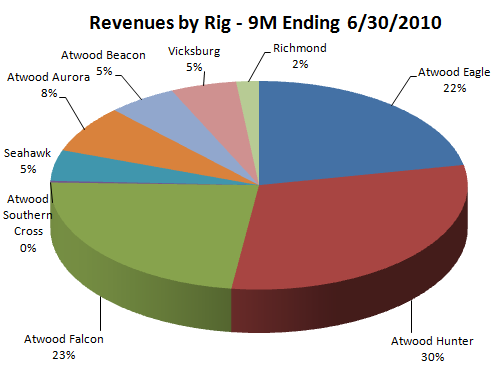 The map below illustrates the geographical diversity of operations based on the current location of each of the company’s rigs as well as office locations (click on the image to enlarge): 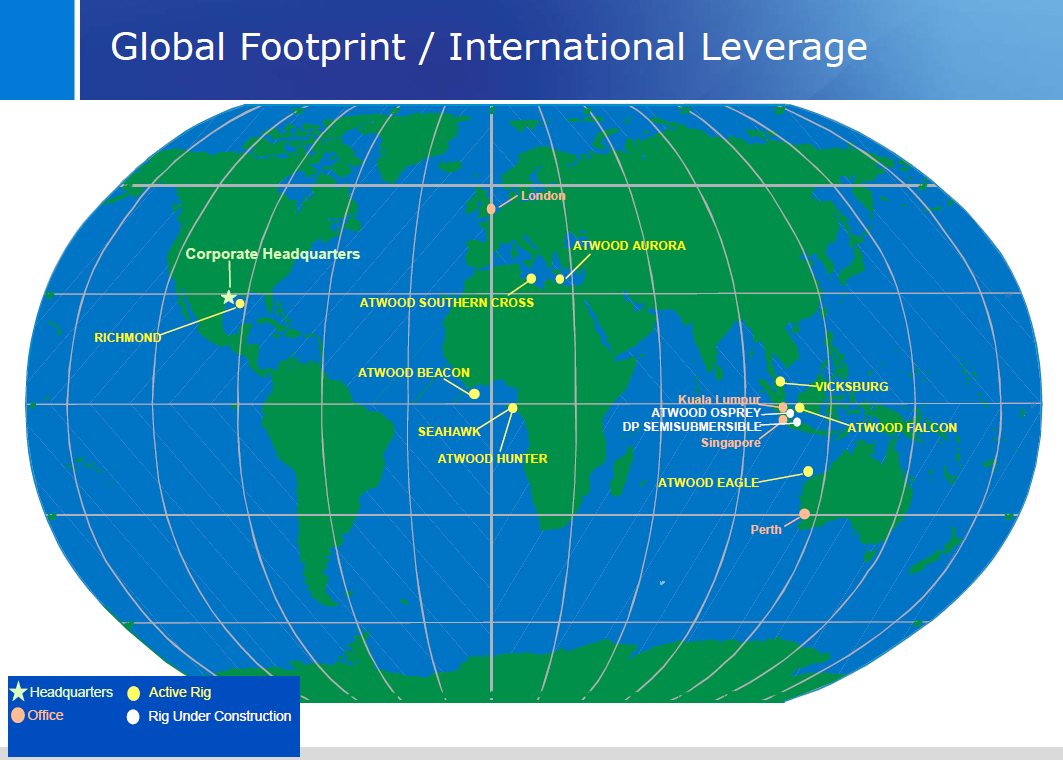 In a recent presentation, management indicated that ultra deepwater rigs should remain fully utilized despite newbuilds that are projected to come to market in the near future.  Atwood has already contracted the newbuild Atwood Osprey with Chevron starting in the second quarter of fiscal 2011 at a dayrate between $450,000 and $475,000.  The Osprey has a maximum water depth of 8,200 feet.  The “to be named” semisubmersible with a 10,000 foot maximum water depth has yet to be contracted but is not scheduled for completion until the third quarter of fiscal 2012.

From time to time, Mr. Market takes leave of his senses and decides to punish the shares of all companies in an industry despite the different characteristics of individual players.  The highly unlikely “worst case” scenario of all Gulf of Mexico waters closing to all forms of oil exploration (shallow and deepwater) would have an impact on many companies operating in the region including some that we have profiled in the past.  However, even such a worst case scenario would have almost no impact on Atwood Oceanics.

The shares are clearly cheap from a valuation perspective when looking at likely earnings for the current fiscal year or fiscal 2011.  The 28 percent premium to tangible book value is somewhat higher than the valuation of Noble Corporation and Ensco but does not appear to be very aggressive.  From an economic perspective, very little has changed for Atwood Oceanics since April yet the shares are on the discount rack.  Investors seeking exposure to the offshore drilling sector without taking any material risk associated with the Gulf of Mexico may want to consider the company for potential investment.

Hat tip to Ken Fisher’s mention of Atwood in his Forbes column appearing in the September 13 issue.

Disclosure: Long Noble.  No position in Atwood Oceanics or any other company mentioned in this article.