Of the tens of thousands of attendees at every Berkshire Hathaway annual meeting, it is likely that a majority have a working understanding of Warren Buffett’s overall investment philosophy.  Mr. Buffett is not only the public face of Berkshire Hathaway but also has become a celebrity in recent years.  There are probably only a handful of business leaders in America who have similar name recognition.  The same, however, cannot be said about Charlie Munger, Mr. Buffett’s longtime business partner and Vice Chairman of Berkshire Hathaway.  Much less has been written about Mr. Munger over the years and he has a far more modest media profile.  Many shareholders probably assume that Charlie Munger and Warren Buffett have an interchangeable view of investing but the reality is much more nuanced. 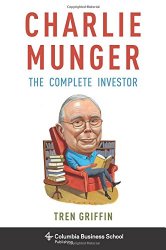 A number of excellent books have covered Charlie Munger’s life and philosophy but, until now, there has not been a relatively brief summary likely to be approachable for a Berkshire shareholder who is simply looking for a quick introduction.  This is why Tren Griffin’s new book, Charlie Munger: The Complete Investor, is likely to be of interest to thousands of Berkshire shareholders as well as others who make it a habit to study the ideas of those who have achieved remarkable success.  Since the book is relatively brief and can be read in one or two sittings, many readers who are already familiar with Charlie Munger may be skeptical regarding whether this book can provide a legitimate overview without being excessively simplistic.  A number of Amazon.com reviews are very skeptical and call the book a mere rehash of previously published material.  In our view, the book has value primarily for individuals who have not been introduced to Charlie Munger’s thinking in the past.

The fact that the book has many direct quotes from Mr. Munger is a source of derision in some of the negative reviews, but it would be almost impossible to write a book purporting to explain the Munger way of thinking about life and investing without extensive use of quotations.   Furthermore, although most of the quotes will be familiar ground for those who have followed Charlie Munger for years, the material will be new and captivating for other readers.  The witty nature of many of the quotations will likely prompt a curious mind to seek additional information elsewhere.

However, the book is not merely a compendium of quotations.  Mr. Griffin does a very good job of presenting the basic concepts of Benjamin Graham’s approach to value investing and this will be useful for readers who are new to the topic.  If all investors simply absorbed the information presented in Chapter 2, Principles of the Graham Value Investing System, much folly would be avoided even if that simply means that a reader resolves to use index funds and avoid the expenses, fees, and underperformance associated with poor active management.

Although most readers already familiar with Charlie Munger will find the chapters on worldly wisdom and psychology to be familiar ground, the book presents this material in a concise and approachable manner that can be read in a very short period of time.  Readers who want to delve deeper will no doubt want to read Poor Charlie’s Almanack which is, by far, the most entertaining and comprehensive coverage of Charlie Munger’s philosophy.  But Mr. Griffin succeeds in presenting the basics to a reader who could very well be intimidated by the time commitment required to read the Almanack.

One of the curious aspects of the book is that Mr. Griffin often repeats the term Graham Value Investing System while discussing Charlie Munger’s specific investment approach.  While it is no doubt true that nearly all value investors have adopted the foundational elements of Mr. Graham’s writings, Charlie Munger has been influenced to a much greater degree by Philip Fisher’s approach to owning higher quality companies.  Mr. Griffin does discuss Mr. Fisher’s influence but seems to more heavily weigh Benjamin Graham when it comes to explaining Charlie Munger’s overarching approach to investing.

Charlie Munger is often described as Warren Buffett’s “sidekick” at Berkshire, a depiction that is both disrespectful and inaccurate.  Although Mr. Munger is modest about his contributions to the success of Berkshire Hathaway, his role in nudging the company toward purchasing higher quality businesses rather than “cigar butts” has added enormous value over time.  Berkshire Hathaway shareholders, as well as other interested investors, would do well to study Charlie Munger’s life and investment philosophy.  Mr. Griffin’s book makes this process approachable with a minimal time investment.  As Warren Buffett has said, value investing is like an “inoculation”:  once presented with the basics, one either “gets it” or does not.  This book makes is far more likely that someone new to value investing will “get it” and seek out additional information on Charlie Munger in particular and value investing in general.