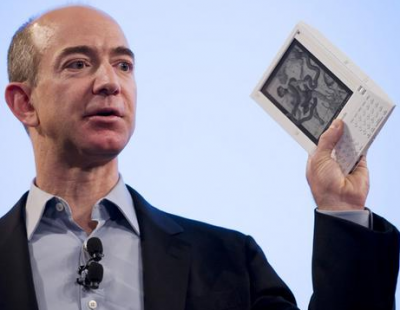 Has the tipping point been reached in the transition from printed hardcover books to e-books?  It appears that this might be the case based on statistics released by Amazon.com in a press release today.  According to the company, for every 100 hardcover books sold over the past month, 183 Kindle books were sold.  This does not include free Kindle books but does include sales of hardcovers where there is no Kindle book equivalent.

Jeff Bezos, CEO of Amazon.com, believes that the Kindle’s new price of $189 has created a tipping point:

“We’ve reached a tipping point with the new price of Kindle—the growth rate of Kindle device unit sales has tripled since we lowered the price from $259 to $189,” said Jeff Bezos, Founder and CEO of Amazon.com. “In addition, even while our hardcover sales continue to grow, the Kindle format has now overtaken the hardcover format. Amazon.com customers now purchase more Kindle books than hardcover books—astonishing when you consider that we’ve been selling hardcover books for 15 years, and Kindle books for 33 months.”

There has been much speculation in recent months regarding the price point for e-reader devices that would result in mass adoption.  While mass adoption may require a price point even lower than $189, it is possible that many serious readers have been buying Kindles in response to the recent reduction.  While Amazon.com does not release detailed statistics on Kindle or e-book sales, the press release certainly implies a large acceleration in the growth rate of device sales.

An increase in sales of Kindle e-books does not necessarily imply that all of these customers are actually reading the books on the Kindle device.  This is because Amazon.com has created apps that allow iPad and iPhone users to read Kindle e-books.  Due to Amazon’s wide selection of titles, it is likely that strong sales of the iPad have boosted Amazon’s e-book sales.  Amazon.com does not release figures for sales of Kindle devices.

It is also possible that many readers are not making a choice between the iPad and Kindle and simply buying both.  The display technology of the Kindle uses e-ink which attempts to replicate the experience of reading a document on paper while the iPad uses a backlit screen.  As a result, anyone who wants to read a book in direct sunlight will find it difficult to use the iPad and may also purchase a Kindle.  Since Amazon.com allows Kindle e-books to be read on multiple devices, a customer could read a book on the iPad while indoors and then switch to the Kindle at the beach.

The price of the iPad is certainly far too high for mass adoption, but the Kindle may be getting close to the tipping point.  It seems safe to say that a price under $100 would trigger mass adoption while products priced at the $500 level will not.  However, the shape of the demand curve remains unknown at this point.  Amazon.com’s announcement today is more a reflection on the demand generated by enthusiastic early adopters than an imminent sign of readers abandoning the traditional printed word in favor of electronic delivery.

Disclosure:  No position in Apple or Amazon.com.