A Closer Look at Markel Ventures

Markel Ventures is a wholly owned subsidiary of Markel Corporation focusing on acquiring companies outside the insurance industry.  Starting with the $14 million acquisition of AMF Bakery Systems in 2005, Markel Ventures has grown into an operation that generated over $1 billion in revenue in 2015 which accounted for nearly 20 percent of Markel’s total revenue.  Although the vast majority of Markel Corporation’s value remains tied to its insurance subsidiaries, Markel Ventures has grown to be a more important part of the overall business.

We have covered Markel on a number of occasions in recent months starting with an overview of the company shortly after shares reached $800 in June 2015.  Although the Markel Ventures operation was discussed, the valuation estimate did not explicitly assign any value to the non-insurance subsidiaries, putting forth the following argument:

We choose to mostly disregard Ventures when assessing Markel’s current value and view the operations as providing additional upside potential in the future – perhaps significant upside potential.  In other words, it might be best to demand Markel Ventures for “free”, meaning that one could demand sufficient value from the insurance and investment operations to justify the price paid for the stock without giving consideration to the additional value potential of Ventures.

Shares have recently been climbing toward the $1,000 level which can be partially attributed to the company’s strong insurance results and book value growth in recent quarters.  However, the expansion of the company’s price-to-book ratio implies that market participants are starting to place more value on Markel as a “mini-Berkshire”.  Insisting on valuing Markel based on the insurance operations alone makes the current price appear to be increasingly stretched.  While changing valuation models in response to a run-up in a stock price is potentially hazardous, so is ignoring an important segment of a company and coming to the wrong conclusion regarding whether the shares continue to offer a reasonable value.  It is clearly past due to take a more serious look at the history and current composition of Markel Ventures.

Although Markel Ventures began operations in 2005, the company took a conservative approach in terms of how quickly to build up its portfolio of non-insurance operations.  After the AMF Bakery Systems acquisition in 2005, the company waited until 2008 to add a second business and did not commit significant capital until the economy was in the midst of the severe economic downturn following the financial crisis of 2008.  Markel Ventures was first discussed in the company’s 2009 letter to shareholders.  Management argued that the criteria for acquisitions was essentially the same as the criteria for stock market investments:

Strategically we believe the ongoing development of Markel Ventures will create value for Markel. All of these companies fit our longstanding investment discipline. As is the case in what we seek in our portfolio of publicly traded businesses, these businesses are profitable, with good returns on capital, they are run by management teams with equal measures of talent and integrity, they will use their profits to either grow their existing business or return the cash to Markel and we acquired them at fair prices.

Ventures was expected to provide opportunities for reinvestment of capital within individual units or elsewhere within Markel.  Additionally, management found it attractive to have a source of earnings and cash flow independent from the insurance business which can provide additional flexibility to deploy cash at the holding company level without undue regulatory scrutiny during stock market downturns.

During the early years, Markel provided very limited data regarding the non-insurance subsidiaries.  Although significantly more detail has been provided over the past several years, some estimations were still required when coming up with a picture of the overall acquisition history.  The data in the following exhibit should be considered a good faith estimate rather than a precise accounting of the acquisition history of Markel Ventures (click on the image for full size): 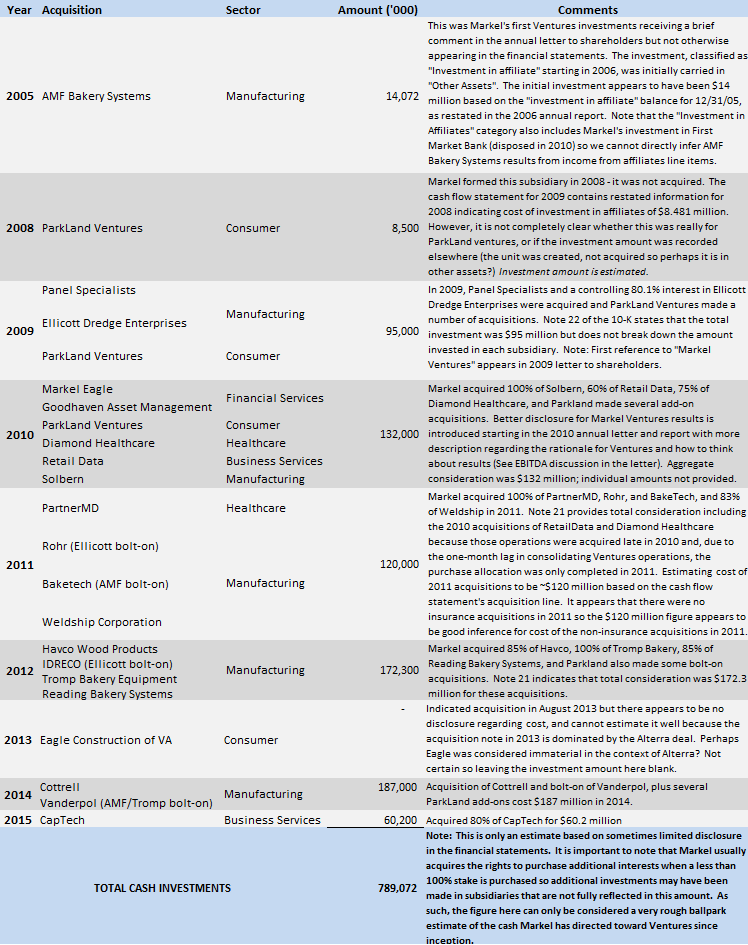 The bakery businesses have been consolidated into the Markel Food Group and links for the websites of the other subsidiaries can be found on Markel’s website.  Many of the businesses are quite interesting to read about but to keep this article to a reasonable length, we will refer the reader to Markel’s website for further information and proceed to a relatively high level look at the overall Markel Ventures operation based on consolidated information found in Markel’s financial statements.

Since 2012, Markel has provided a balance sheet for the Markel Ventures operations.  This is obviously useful for any evaluation of the unit’s overall economic performance and it also serves as a check on the imprecise accounting of the Ventures acquisitions presented above.  The following exhibit shows the balance sheet data for Markel Ventures for the past four years: 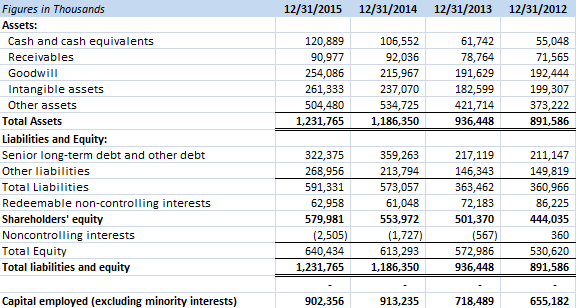 The non-controlling interests on the balance sheet arise from the fact that Markel Ventures often acquires a majority stake in a company that falls short of complete ownership.  In many cases, the remaining shares of the company are acquired subsequent to the initial transaction at prices that vary with the post-acquisition performance of the unit.  We can see that total capital employed of approximately $900 million is roughly in line with our estimate of the cash Markel Ventures has deployed over the past decade.  Earnings of ventures subsidiaries that are retained within the Markel Ventures organization would increase equity over time.  However, the balance sheets we have access to do not provide enough granularity to isolate changes in equity due to earnings retention versus new investment. 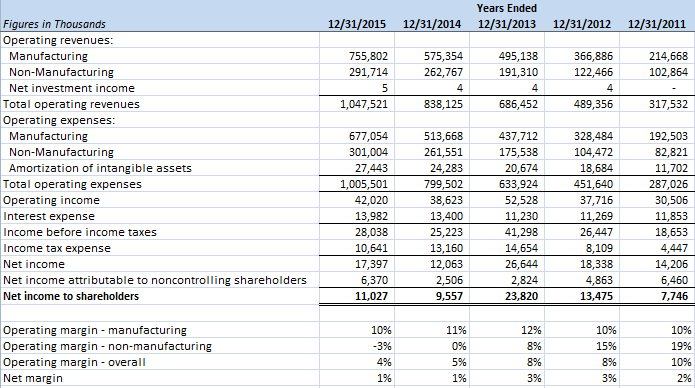 At a surface level, these results are not exactly inspiring to look at.  The overall operating margin has been in the mid-single digits over the past couple of years and net income has been modest relative to the investments made in Markel Ventures to date.  However, for a number of reasons, reported net income is not a particularly good measure of how the businesses have performed to date.  The reader should be very skeptical of this claim since specious “adjustments” to earnings have proliferated like wildfire in recent years.  EBITDA, Adjusted EBITDA, and even more creative measures are usually designed to obfuscate rather than enlighten.

Markel management does provide EBITDA information for Markel Ventures with the rationale explained in detail on pages six to eight of  the 2010 letter to shareholders.  Readers are encouraged to review this information and come to their own conclusions regarding the usefulness of EBITDA when it comes to evaluating Markel Ventures.  From our perspective, the primary use of EBITDA is to evaluate the performance of the business relative to capital employed in a manner that is independent of capital structure and tax policy.  The exhibit below shows the EBITDA information reported by Markel over the past seven years:

The use of EBITDA, although warranted with the caveats explained by Markel’s management, seems a rather crude measure particularly because depreciation is a very real expense that must be taken into account.  Certain Markel Ventures subsidiaries are more capital intensive than others but we can see that depreciation has become a rather meaningful line item.

We prefer to look at Markel Ventures by starting with the net income line item and then making adjustments that seem appropriate in an effort to understand the true economic earnings of the group of businesses.  There are three major adjustments we have made:

The exhibit below shows our estimate of “economic earnings” for Markel Ventures based on making the adjustments discussed above and accounting for tax effects.  Note that the tax effect line item may be overstated if amortization and/or goodwill impairments are not deductible for income tax purposes.  However, sufficient information does not appear to exist to make this determination so the adjustment is made in the interests of conservatism.

If the estimate of economic earnings is in the ballpark and recent trends continue, it looks like the ventures operations, in aggregate, are earning around 10 percent on equity.  Obviously, this adjusted figure is far different from the return on equity one would calculate based on reported net income.  However, the adjustments seem quite defensible based on the arguments presented above.

Markel recently reported results for the first quarter of 2016.  Markel Ventures EBITDA was $41.1 million, up from $33.6 million in the first quarter of 2015.  Net income to shareholders was $14.1 million, up from $10.5 million.  Management reported that the increases were primarily due to higher earnings at certain manufacturing operations as well as due to the CapTech acquisition in December 2015.

The valuation approach presented in June 2015 explicitly did not account for any value associated with the Markel Ventures operations.  As noted earlier, the assumption was that any value that existed in the ventures operation would be an additional “margin of safety” for investors or could be viewed as a bonus.

Although the vast majority of Markel’s intrinsic value still resides in the insurance business, Markel Ventures has been growing to the point where it should be explicitly considered in the valuation process.  There are a number of approaches that could be used to incorporate Markel Ventures.  The methodology we have chosen, which clearly is not the only “valid” approach, is to segment the insurance and ventures operations as if they were two separate companies.  We estimate the value of each unit and then come up with a sum of the parts to arrive at the total valuation for Markel Corporation.

The valuation of the insurance business is essentially identical to the approach presented in June 2015, except that we have deducted equity attributable to the ventures operations from the estimate of insurance equity.  We assume that Markel posts a 100 percent combined ratio over the next five years and deploys its investments at various rates of return.  We then come up with a terminal price-to-book value for the insurance business only to estimate the market’s assessment of the business in five years.  This valuation is then discounted to estimate today’s present value of the insurance subsidiaries.

The Markel Ventures valuation model simply estimates 2016 “economic earnings” and applies an earnings multiple ranging from 16 to 20 to arrive at an estimate of current intrinsic value.  One can debate both the estimate of economic earnings and the multiple selected but a good “reality check” is that the estimated valuation falls within a plausible range given the cash that Markel has invested into these businesses over the past decade.

The exhibit below presents the valuation exercise for Markel Corporation as described above: 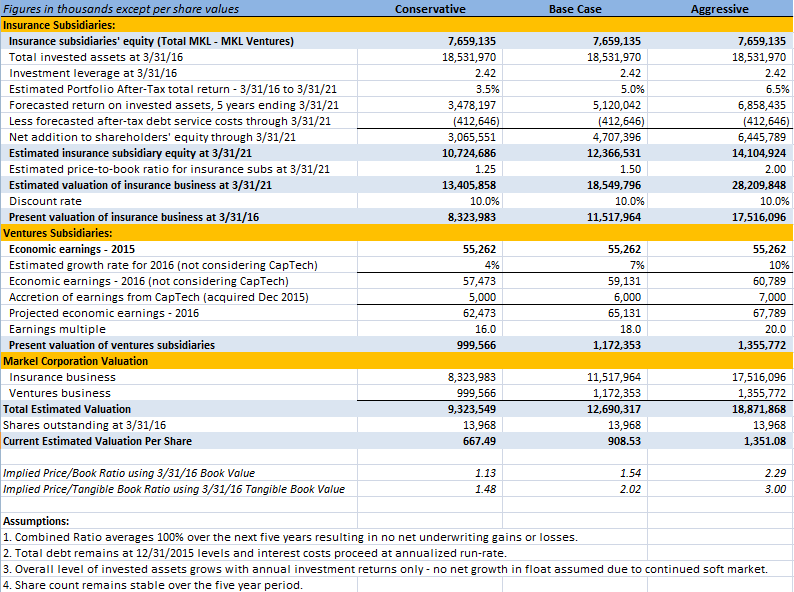 The overall valuation of Markel Corporation is simply the sum of the parts divided by shares outstanding at March 31, 2016.  Taking the base case estimate, we arrive at a valuation of $909 per share, with $825 per share attributed to insurance operations and $84 per share attributed to Markel Ventures.  Although this baseline estimate is materially higher than what we would estimate if Markel Ventures were totally ignored, it is still substantially below where Markel has traded recently.

Markel has a very strong track record, as we have pointed out in past articles, and the current share price might very well prove to be justified based on future events.  Nevertheless, it is always prudent to estimate the value of a business based on sound principles that are not subject to changes designed to “justify” a recent price advance.  At the same time, valuation methodologies cannot remain so fixed as to fail to respond to material changes in the underlying business. Markel Ventures has clearly reached the point where shareholders must estimate its value in some manner.  The method above is one of many ways to do so.

A Closer Look at Markel Ventures