Ensco plc recently announced second quarter 2010 earnings of $126.3 million, or $0.89 per share.  As expected, the results were negatively impacted by lower utilization for the fleet as well as lower average dayrates.  Contract drilling revenues were $406.3 million compared to $449.4 million for the first quarter.  Second quarter 2009 contract drilling revenues were $497.3 million.  The company ended the quarter with $1.2 billion of cash and tangible book value of $5.4 billion, or approximately $38 per share.  The long term debt to capital ratio was 4 percent and total contract backlog was $2.6 billion.

We profiled Ensco in greater detail on June 11 when shares traded at $38.31.  The share price has advanced to $41.20 at the close of trading today.  Recently, we learned that Greenlight Capital acquired a large position in Ensco during the second quarter.  David Einhorn, President of Greenlight Capital, recently explained his rationale for the Ensco position.  In this article, we will take a closer look at Ensco’s results with a particular focus on trends in dayrates as well as the company’s increasing commitment to the deepwater segment.

It is helpful to examine trends in quarterly results by segment over the past ten quarters particularly because Ensco’s sources of revenue have changed dramatically over this period.  The company organizes its business into four segments.  All deepwater activity is grouped into a single operating segment regardless of the location of the rigs.  The company has three jackup segments organized by region:  Asia Pacific, Europe and Asia, and North and South America.

The following exhibit shows quarterly data for each segment for rig utilization, average dayrates, contract drilling revenues, operating income, and total assets. Please click on the image for a larger view of the data. 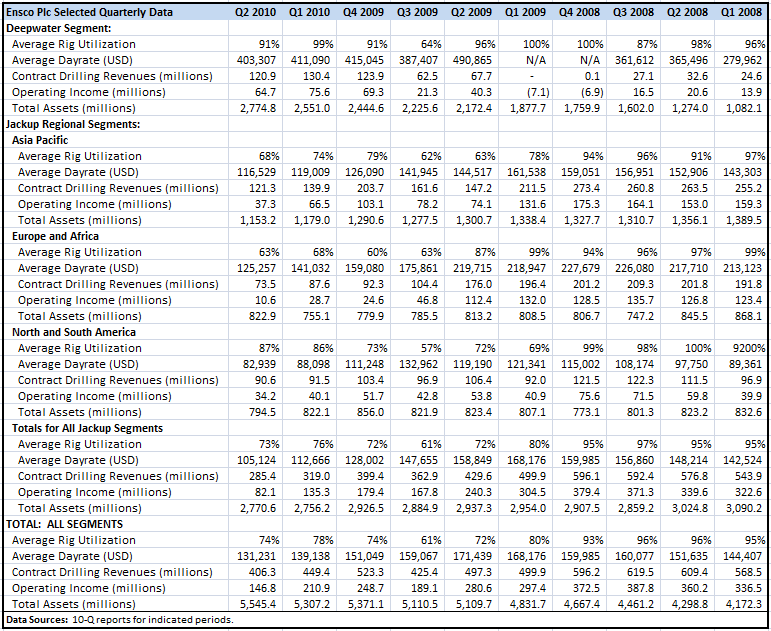 We can make several observations regarding the data in the exhibit:

The following charts display segment revenues, operating income, and assets by quarter.  As noted previously, the regional segments are all made up of jackup rigs. 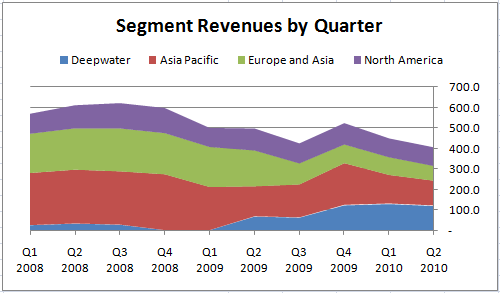 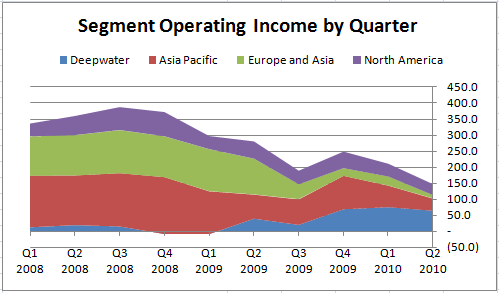 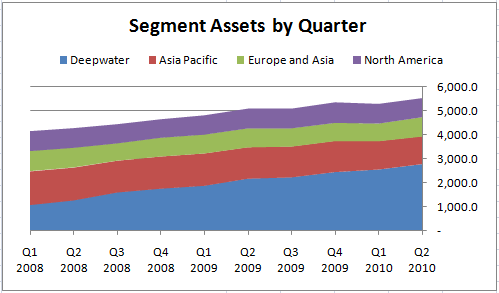 Several of Ensco’s customers operating in the Gulf of Mexico have submitted force majeure notices related to the federal government’s moratorium on deepwater drilling. According to the company’s latest fleet status report (pdf), such notices have been received for one of the ultra-deepwater semisubmersible rigs (Ensco 8500) as well as four jackup rigs (Ensco 68, Ensco 82, Ensco 86, and Ensco 87).  The company has contested all of the force majeure notices and notes that the jackup rigs are all still operating.  In addition, Ensco 8502 is scheduled to begin work on a contract in August but the customer has questioned whether the moratorium should delay commencement of the contract.

During a conference call to discuss quarterly results, management reiterated the company’s position regarding these contracts and, in response to an analyst’s question, stated that most of the contracts seem secure enough to recognize revenue while the matter is in litigation.  However, there is clearly risk associated with the revenue from these rigs as well as the contracted backlog associated with future work for these rigs in the Gulf of Mexico.  It is especially unclear why the customers operating the jackup rigs would have legal standing to declare force majeure given that the rigs operate in shallow water.

It is clear that Ensco’s results have deteriorated in recent quarters, but the company remains highly profitable with a very large cash balance and minimal debt.  As we noted previously, David Einhorn’s fund has invested in Ensco shares based on the premise that the current valuation does not assign much, if any, value to the investments the company has made in the deepwater fleet.  This quote from Mr. Einhorn’s latest letter to shareholders (pdf) sums up the bullish thesis very well:

The shallow water drilling business, which is unaffected by the drilling moratorium, generates $4.00 per share in unlevered mid-cycle earnings and $8.00 per share in peak earnings. At the Partnerships’ average cost of $39.41 per share, we appear to be getting the shallow water fleet at a low value and the deepwater fleet (in which ESV has thus far invested over $15 per share to build and should add $2.00 and $4.00 to mid-cycle and peak EPS respectively) for free. ESV shares ended the quarter at $39.28 each.

It is also important to note that Ensco’s jackup fleet is made up of more advanced models that should be in high demand once overall industry conditions improve.  All of Ensco’s jackup rigs are of the independent leg design which are more flexible than mat supported jackup rigs.  The company has also invested in high specification jackups, most recently with a purchase of an advanced model from Diamond Offshore.  Higher specification jackups command better dayrates and are less likely to be cold stacked than older and less flexible models.

For more information, please refer to Ensco’s 10-Q report as well as our more complete profile on the company written in mid June.

Disclosure:  No position in Ensco plc.