“Follow your heart and invest your time and resources in a product that you love.  If you are excited about what you are making, it will hold your interest and you will be well equipped to interest your customers in it.”  — Stef Wertheimer

Contemporary business success stories often focus on entrepreneurs who come up with an idea, obtain funding, and score quickly by selling the business at an attractive valuation either via acquisition or through an offering of stock to the public.  There can be no doubt that a sub-set of these entrepreneurs have made real and lasting contributions to society in astonishingly short periods of time, but often we are left scratching our heads wondering about the valuations obtained by companies with no compelling business model or pathway to profitability.  In contrast, individuals who spend a lifetime building up a business do not typically receive the same attention.  Perhaps this is because the value of their creation is not recognized dramatically in a few years but snowballs over many decades.  However, if one seeks insight into how real and lasting value is created, reading the biographies and memoirs of entrepreneurs who have spent decades perfecting their craft is usually worthwhile.

The Habit of Labor:  Lessons from a Life of Struggle and Success 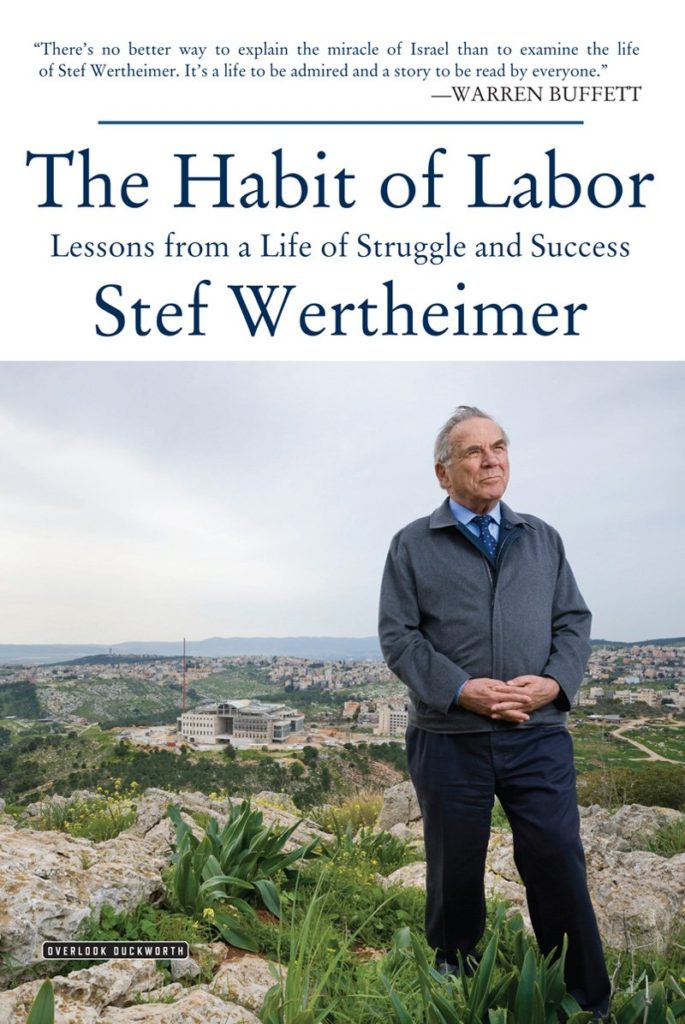 Stef Wertheimer’s formative years were spent in his native village of Kippenheim, Germany during the turbulent years leading up to the second world war.  Mr. Wertheimer’s prosperous family was deeply impacted by the Nazi persecution of Jews during the early-mid 1930s and the family decided to emigrate to British-controlled Palestine in 1937.  At the age of ten, Mr. Wertheimer found himself in an unfamiliar culture and had to grow up quickly as his family’s economic security deteriorated after his father’s business began to fail.  An early entrepreneurial aptitude coupled with a rebellious streak led Mr. Wertheimer to make important contributions to Israel’s early industrialization.  Iscar was founded in 1952 in a shack next to Mr. Wertheimer’s home.  It was valued at $5 billion 54 years later when Berkshire Hathaway acquired a majority interest.  The story of this extraordinary up-from-the-bootstraps business success is the main subject of Mr. Wertheimer’s book, The Habit of Labor:  Lessons from a Life of Struggle and Success.

Mr. Wertheimer did not complete his formal education and learned various crafts through experimentation, independent study, and apprenticeships as a young adult.  His subsequent experiences in the Palmach in the mid-late 1940s, particularly working in urgent situations requiring quick development of military supplies, clearly contributed to his leadership skills and aptitude for innovation under extreme pressure.  Nevertheless, in post-independence Israel, Iscar did not immediately prosper and the company faced five lean years with little monetary reserves.  Government policy did not recognize the importance of industrialization, offered little support, and there was very limited credit available for expansion.

Through the course of the narrative, Mr. Wertheimer provides many details regarding the rise of Iscar from these modest beginnings to the export powerhouse it became prior to Berkshire’s acquisition in 2006.  Additionally, readers who are interested in the economic development of Israel will find many aspects of the book interesting, particularly those related to Mr. Wertheimer’s lifelong focus on industrialization and the impediments that he faced.  There is much to learn regarding the benefits of vocational training coupled with attractive industrial parks focused on integrating education, manufacturing, arts, culture, and a high quality of life in communities that were previously agrarian, isolated, and undeveloped.

In late 2005, Eitan Wertheimer, who had taken over management of Iscar from his father, sent a brief letter to Warren Buffett describing Iscar and concluding that Berkshire Hathaway would be an ideal home for the company.  At the time, Mr. Buffett had never heard of Iscar and had never purchased a subsidiary outside the United States.  However, Mr. Buffett found Iscar’s primary business of developing consumable cutting tools attractive and was impressed with management, as he wrote in Berkshire’s 2006 annual letter to shareholders (pdf):

ISCAR’s products are small, consumable cutting tools that are used in conjunction with large and expensive machine tools. It’s a business without magic except for that imparted by the people who run it. But Eitan, Jacob and their associates are true managerial magicians who constantly develop tools that make their customers’ machines more productive. The result: ISCAR makes money because it enables its customers to make more money. There is no better recipe for continued success.

Stef Wertheimer provides an account of the deal in his book and states that the $4 billion price tag was not the primary factor that led his family to pursue the deal with Berkshire.  Mr. Wertheimer was primarily concerned with “the continued Israeli production, in the Galilee, by Israeli hands and with an Israeli brain, within an advanced and competitive world.” Obviously the Wertheimer family wanted a fair deal for the product of sixty years of effort but non-economic factors clearly played an enormous role.  We are reminded of the factors that led Bill Child to sell R.C. Willey to Berkshire Hathaway a decade earlier.  History doesn’t always repeat but it often rhymes.

As we noted recently, Berkshire was a very large company in 2006 but still relatively small compared to what it has become today.  With shareholders’ equity of $91 billion at the end of 2005, Berkshire’s purchase of 80 percent of Iscar for $4 billion represented a significant allocation of capital.  It is interesting to note that approximately half of the purchase transaction was accounted for by goodwill, representing the consideration paid in excess of identifiable assets:

The Wertheimer family retained a 20 percent interest in the business until 2013 when they exercised a put option to sell their remaining interest (pdf) to Berkshire for $2.05 billion.  Based on this purchase, the implied value of Iscar was $10.25 billion in mid 2013, up from $5 billion seven years earlier, as Mr. Buffett noted at the time:

“Since the time IMC entered our lives, my partner, Charlie Munger, and I have enjoyed Berkshire’s association with the company, the Wertheimer family, and the company’s management team,” said Warren Buffett, Berkshire Hathaway Chairman and Chief Executive Officer. “As you can surmise from the price we’re paying for the remaining interest, IMC has enjoyed very significant growth over the last seven years, and we are delighted to acquire the portion of the company that was retained by the Wertheimer family when IMC first became a member of the Berkshire group of companies. We look forward to continuing our stewardship of this unique company founded by the Wertheimer family in Israel 60 years ago and nurtured into a truly global enterprise.”

Berkshire provides limited disclosure on Iscar in its annual reports so we do not have the information required to independently analyze Iscar’s value.  However, the valuation arrived at in 2013 was clearly set in 2006 at the time of the original acquisition.  The Wertheimer family negotiated a put option with Berkshire that specified the value of their remaining stake based on some kind of formula that clearly took into account the economic value of the company.  The model of acquiring a large majority stake from a family owned business and having the family retain significant ownership has been used before (Nebraska Furniture Mart is an example that comes to mind) and can align the interests of the family with Berkshire in the years immediately following an acquisition.  Ultimately, however, Mr. Buffett is relying on the management of these formerly family owned businesses to continue coming to work far past the point where there is any economic need to work.

After the 2013 transaction, Mr. Buffett noted that arcane accounting rules required Berkshire to substantially write down the value of the initial 80 percent ownership of Iscar due to the fact that the company acquired the remaining 20 percent.  This mystifying accounting rule also caused Berkshire to write down the value of Marmon when a similar series of transactions eventually resulted in full ownership.

Berkshire has paid a total of approximately $6 billion in aggregate for full ownership of Iscar which had a valuation in excess of $10 billion in mid 2013, and part of the $6 billion (the amount was not specifically enumerated) has been written down due to accounting requirements.  We do not know whether Iscar has remitted any cash to Berkshire over the years, or the precise amount if it has.  However, based on the information we do have, it is quite clear that Berkshire’s acquisition of Iscar worked out very well.  The Wertheimer family no longer has an ownership interest in Iscar but Eitan Wertheimer continues to be involved in the business along with the management team that he assembled over the past three decades.

Given Berkshire’s current shareholders’ equity, it would take a deal almost three times the size of the initial Iscar acquisition in 2006 to have a similar impact today.  The number of family owned businesses like Iscar of a size required to “move the needle” at Berkshire is smaller today than it was in 2006.  Nevertheless, this acquisition model can still be useful for Berkshire as well as for aspiring “mini Berkshires”.