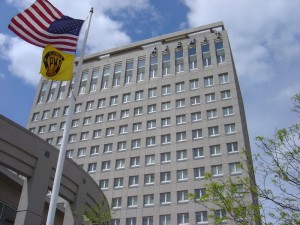 Over the past five years, Berkshire Hathaway has been a frequent topic on The Rational Walk easily surpassing the coverage of any other company.  In retrospect, there have been many reasons for this lopsided treatment of one company in a universe of thousands of publicly traded businesses.  What motivated this unusual focus on Berkshire Hathaway?

Perhaps the most important reason is the clear fact that Berkshire Hathaway is a unique company driven by a very uncommon management philosophy which has led to extraordinary results for shareholders. The record of Warren Buffett and Charlie Munger’s management of Berkshire Hathaway over the past fifty years is unique in business history and certain to be examined for decades to come.  Both investors and managers naturally seek to better understand this extreme outcome and the approach that was used to achieve it.

However, another important motivation involved the market’s valuation of Berkshire in the aftermath of the tumultuous events of 2008 and early 2009.  For a number of years, it appeared that the market had permanently reassessed Berkshire’s intrinsic value relative to valuation levels that had prevailed for a long period of time.  In recent weeks, Berkshire’s stock price has reached record highs, but more importantly the valuation of the stock has returned to levels that might have been considered within the bounds of “normalcy” prior to late 2008.  In this article, we revisit Berkshire’s current valuation relative to historical ranges and assess whether a return to normalcy is justified.

There are a number of approaches that analysts have used to estimate Berkshire Hathaway’s intrinsic value, many of which have been discussed in some detail in past articles as well as in more extensive reports published in 2010 and 2011 (both of which are now available at no cost).

Following Berkshire’s price-to-book ratio is one of the more straightforward approaches and does have some important limitations.  However, it does have the advantage of being easily calculated based on market prices and figures published on a quarterly basis in Berkshire’s SEC filings and there is at least rough correlation between valuations derived from the price-to-book ratio and more sophisticated approaches.  Additionally, it is often cited by market participants and analysts and is therefore a good way of looking at investor sentiment with respect to Berkshire shares.  Perhaps most importantly, price-to-book is the criteria upon which Berkshire’s repurchase plan is based indicating that Warren Buffett regards this metric to be an important, albeit understated, measure of Berkshire’s intrinsic value.

The chart below presents the closing price of Berkshire Hathaway Class A shares for each trading day since December 31, 1999 along with the then-current book value per A share which is published on a quarterly basis.  Additionally, Berkshire’s repurchase threshold, which was introduced in September 2011, is charted since the date of its introduction.  The repurchase threshold was initially set at 110 percent of book value in September 2011 and subsequently raised to 120 percent of book value in December 2012. 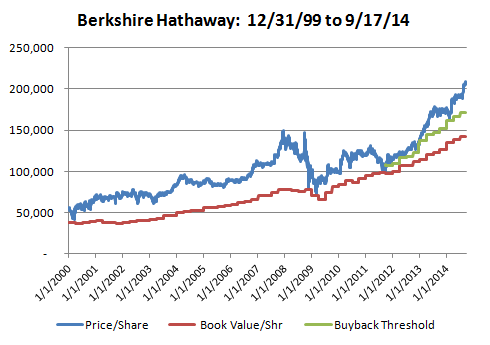 From this simple chart, we can see that Berkshire has almost always traded at a significant premium to reported book value except on a few occasions.  In early 2000, Berkshire was out of favor as the dot-com bubble reached its peak and briefly traded at only a small premium to book value.  This situation prevailed for only a short time before Warren Buffett indicated an interest in repurchasing Berkshire shares at $45,000, which was 118 percent of book value at the time.  During the depths of the panic in the fourth quarter of 2008, Berkshire briefly approached book value as reported at the end of the third quarter;  however, this was during a time when market participants were not only in a state of panic but also correctly anticipated that depreciation in Berkshire’s large portfolio of marketable securities would lead to a drop in book value.  During the third quarter of 2011, Berkshire shares approached book value which prompted the introduction of Berkshire’s repurchase plan.

The following chart represents the same underlying data but in a form that allows a more clear examination of the price-to-book ratio trend over time.  We simply take the closing price of Berkshire’s Class A shares and divide by the last reported book value figure provided by Berkshire’s annual and quarterly SEC filings.  The dark red line represents Berkshire’s repurchase authorization threshold introduced in September 2011 and revised in December 2012. 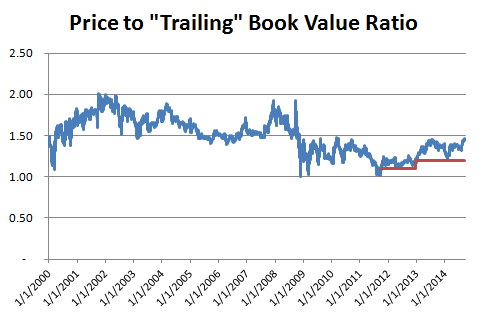 It is important to recognize the fact that Berkshire Hathaway was not alone in the market’s valuation adjustment of “financial” companies following the financial crisis.  The level of perceived risk in financials increased dramatically in the aftermath of September 2008 and for the most part, the market was justified in its reaction at the time given the uncertainty that prevailed.  Mr. Buffett himself has commented extensively regarding the importance of government intervention at the time, and it was not clear whether officials were up to the task required.  Regardless of one’s views on the specifics of the various “bailouts”, it is quite clear that the carnage in the financial sector would have been far worse had there been less intervention at the time.

Despite the rationality of the market’s overall aversion to financials in late 2008, it is important to point out that Berkshire itself was in remarkably good shape compared to other companies.  Furthermore, Berkshire was a conglomerate engaged in diverse business activities even though it was perceived and valued as a financial.  Berkshire was in a position to provide financing to others at a time when lack of liquidity threatened to sink firms that were previously seen as rock solid.  One could argue that the market’s failure to differentiate Berkshire from its perceived peers was irrational on the part of Mr. Market.

On the other hand, investors had a wide array of choices as the market hit its lows in early 2009 and Berkshire Hathaway stock is necessarily evaluated against other alternatives.  In short, looking at the situation in retrospect, it is no surprise that Berkshire shares were roughly cut in half in less than six months even though intrinsic value couldn’t have possibly dropped by that much.  Indeed, Berkshire suffered a drop of less than 15 percent in book value per share over the course of Q4 2008 and Q1 2009 while the share price dropped over 50 percent from September 19, 2008 to its low on March 5, 2009.

Is a Lower Range Still Justified?

While hindsight might appear to justify the market’s initial reassessment of Berkshire’s intrinsic value in late 2008 and early 2009, it is much harder to make the same case as the United States economy began to recover from the financial crisis.  Even long after market participants had overcome the shocks of 2008 and early 2009, Berkshire shares continued to trade at very low price-to-book ratios.  The implication was that Berkshire’s many franchises were not collectively worth much more than the carrying value of the businesses despite the fact that Berkshire had proven itself to be resilient throughout the downturn.

The post-recession years also brought major changes to the composition of Berkshire itself with the most notable example being the acquisition of Burlington Northern Santa Fe in early 2010.  While property-casualty insurance remains Berkshire’s most important business today, the acquisition of BNSF significantly transformed Berkshire’s earnings stream.  If we also consider the acquisition of Lubrizol, additions to the Berkshire Hathaway Energy portfolio, purchasing the minority interests of Marmon, and many “tuck-in” acquisitions, Berkshire has become far more diversified over the past five years.

BNSF is an interesting case in point when looking at Berkshire’s price-to-book ratio.  At the time of the acquisition, Berkshire used a combination of cash and stock to acquire BNSF and the purchase price was allocated to various accounts on Berkshire’s balance sheet and included substantial goodwill.  As we revisited the BNSF acquisition in late 2013, it became clear that if BNSF had remained a stand-alone company, the market’s assessment of its intrinsic value would have dramatically increased from 2010 to 2013.

The following chart shows the stock price performance of Union Pacific, BNSF’s closest comparable company, from the date of Berkshire’s acquisition of BNSF to September 18, 2014 (click for larger image): 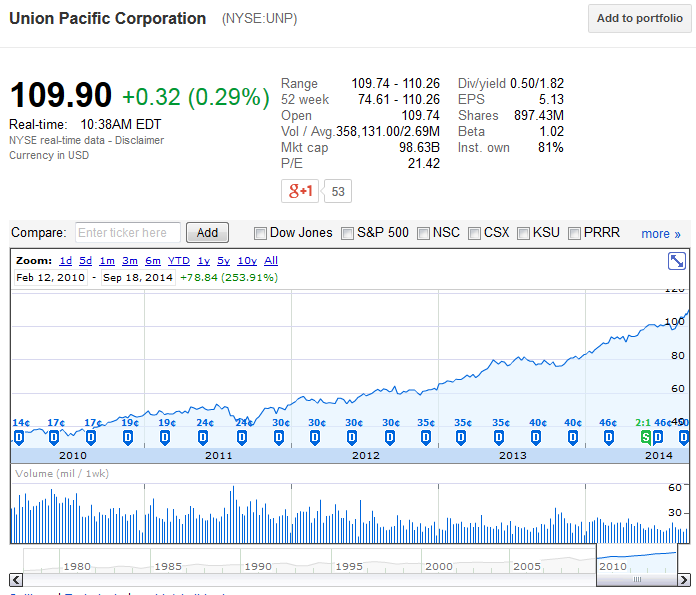 Clearly, if Berkshire Hathaway had waited until today to acquire BNSF, a much higher purchase price would have been required.  Yet, Berkshire’s book value continues to reflect the acquisition cost of BNSF in February 2010 unadjusted for any subsequent reassessment in the eyes of Mr. Market.  If we were to adjust BNSF’s carrying value on Berkshire’s balance sheet to reflect the same level of appreciation as Union Pacific shares, Berkshire’s book value would increase by over $50 billion, or in excess of $30,000 per A share.  However, none of that hypothetical increase in value is reflected in Berkshire’s reported book value.

The example of BNSF discussed above is illustrative not merely because of the rather extreme nature of the potential valuation discrepancy between its carrying value on Berkshire’s balance sheet and its likely market value.  It also alludes to the fact that many of Berkshire’s other businesses have similarly appreciated over time.  The most extreme examples involve companies like See’s Candies that were purchased decades ago at a cost that is a tiny fraction of today’s true market value.  Over long periods of time, one can expect the difference between fair value and carrying value of wholly owned subsidiaries to rise rather than fall, implying that Berkshire’s price-to-book ratio might be expected to increase over time rather than decline.

It appears that Berkshire’s stock price has finally returned to the lower end of a “range of normalcy” in recent weeks.  While no longer as severely undervalued as it was for most of the past six years, there is no evidence to suggest that Berkshire’s share price has reached irrational levels even though it is at a record high.  Given today’s share price, Berkshire shareholders are likely to achieve returns commensurate with the growth of intrinsic value plus perhaps some additional increase in the market’s assessment of the stock.  Fortunately, Berkshire has prospects for intrinsic value growth that are quite attractive in today’s investment environment.

A reader brought up an error in the article related to Burlington Northern Santa Fe.  The article, which remains as originally posted, stated that BNSF remains on Berkshire’s balance sheet at the approximate valuation paid for by Berkshire in February 2010.  While this is technically accurate, the statement ignores the fact that BNSF has remitted dividends to Berkshire on a consistent basis over the years.  BNSF had aggregate net income of $14,012 million from the date of Berkshire’s acquisition through the end of the second quarter of 2014.  During that same period, BNSF paid $14,250 million in cash dividends to Berkshire.  So while BNSF’s book value has remained roughly the same, Berkshire’s overall book value has grown due to cash dividends remitted to the parent company.

Rational Reflections is a newsletter covering current events, investing, personal finance, philosophy, book reviews, and other topics of interest. Enter your email address below to join over 5,700 subscribers.