The process of estimating the ultimate losses resulting from an insurance company’s business is one of the most important tasks facing management.  Many types of policies expose an insurer to liabilities over a very long period of time where the ultimate payout to policyholders will not be certain for years or even decades.  Despite this uncertainty, management must estimate loss reserves for each financial reporting period.  The credibility of these estimates depends, in part, on management’s track record with prior estimates.

Berkshire Hathaway’s 2009 Annual Report was released on Saturday, February 27 but the company’s 10-K Report was not filed with the SEC until Monday, March 1.  The 10-K includes certain information that was not released in the annual report including data related to loss estimation accuracy.

Each year, Berkshire’s Balance Sheet includes a liability line item named “Loss and loss adjustment expenses”.  This line item is management’s estimate of the ultimate liability that will have to be paid out to policyholders.  On page 7 of the 10-K report, we have a reconciliation between the loss estimate as it was stated for each year from 1999 to 2009 along with a summary of how the liability was re-estimated in later years.

The table below is an excerpt from the data presented in the 10-K (click on the image for a larger view): 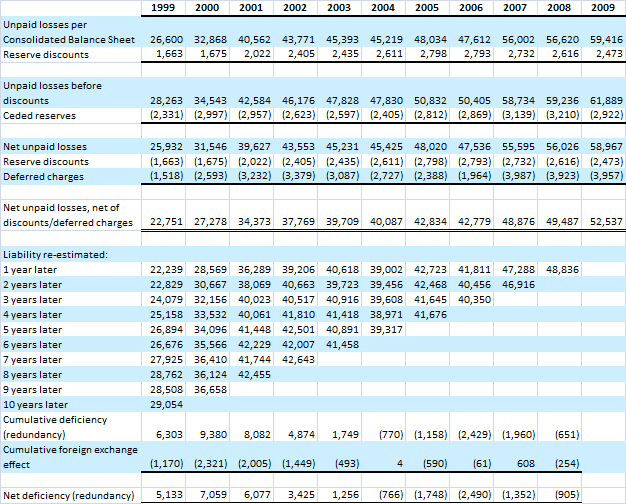 We can see that from 1999 to 2003, the original estimates of losses were insufficient based on subsequent developments and re-estimation of liabilities.  For example, in 1999, the original estimate of Net Unpaid Losses was $22,751 million.  However, the actual liability ten years later based on actual payments to policyholders and estimated remaining payments turned out to be $29,054 million.

While the tables present consolidated figures and do not break out the loss estimates by insurance subsidiary, it is likely that much of the estimation error from 1999 to 2003 stems from the problems at General Re.  As Warren Buffett has stated several times, he was unaware of problems at General Re at the time Berkshire purchased the company in 1998.  Underwriting discipline had faltered and part of the reason may have been due to unrealistically rosy projections of future losses which led to inadequate premium pricing.

Goal is Accuracy – But Very Difficult to Accomplish

When an insurer revises prior loss estimates, prior financial statements are not retroactively modified to reflect these changes.  Instead, the re-estimated amount are reported in earnings over time as components of loss and loss adjustment expenses.  This means that each year, the underwriting loss figure reported to shareholders may include revisions to prior estimates as well as current year developments.

Shareholders should not want to see either overly optimistic assumptions leading to a cumulative deficiency or overly conservative assumptions leading to a cumulative redundancy.  The goal should be to estimate losses as accurately as possible.  Given the uncertainty involved in estimating ultimate losses, particularly in reinsurance lines where ultimate payouts will not be known for decades, it is unrealistic to expect perfection.

The question of loss estimation accuracy is particularly important when one evaluates an insurance company based on the value of the float it generates.  The float based model is the primary method used in the recently released Berkshire Hathaway Briefing Book.  The cost of float is a critical variable that is directly impacted by estimation error.  It is good to see that estimation accuracy has improved in recent years which adds to the level of confidence in the float based valuation model.