I had the opportunity to listen to a live webcast of a talk given by Chick-fil-A founder and Chairman Truett Cathy this afternoon at the National Press Club.  Chick-fil-A President and CEO Dan Cathy, Truett Cathy’s son, also appeared at the event.  Chick-fil-A was a subject of a recent article regarding businesses that manage to maintain a dominant competitive position despite a Sunday closure policy.

Chick-fil-A was founded in 1946 by Truett Cathy when he opened a restaurant named Dwarf House in a suburb of Atlanta.  Today, the fast food chain has 1,475 locations in 38 states.  The company has developed a loyal following with many fanatic customers who camp out overnight when a new store opens in order to win free meals for a year.  According to a National Press Club article, the private company is on track for a 9% increase in sales this year. Revenues are expected to reach $3 billion for 2009.

Buy Six Pack of Coke for a Quarter, Sell Each Bottle for a Nickel

Truett Cathy’s “up from the bootstraps” life story is inspirational and instructive for those interested in how to succeed in business.  “I had the privilege of growing up in poverty,” he said. “The blessing is you have to work for a living.”  Mr. Cathy spoke about his early years buying six packs of Coca Cola for a quarter and selling each bottle for a nickel, thereby making a five cent profit per six pack.  Sound familiar?  This is the same story that Warren Buffett has told on many occasions.

I took note of some other comments made by Truett and Dan Cathy:

Click on the image below or on this link to view the full presentation: 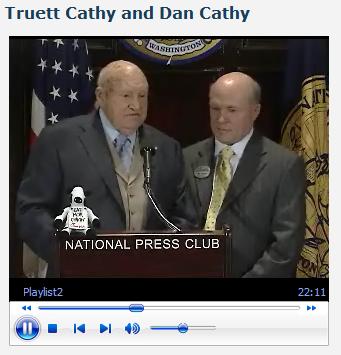 It is hard to avoid the observation that Chick-fil-A would make for a dream acquisition that Berkshire Hathaway might want to consider.  In the past, many Berkshire acquisitions have been made for family run businesses that wish to retain an established culture and deal with estate tax problems.  R.C. Willey is a good example that was recently discussed here.  However, as Mr. Cathy stated several times, the family intends to keep the company private over the long term.

Anyone interested in starting a new business or improving an existing company can learn a great deal from Mr. Cathy’s life story.  Investors should look for companies exhibiting these characteristics when evaluating investment candidates.

Truett Cathy is 88 years old but had this to say about retirement:  “Why would I want to retire from something I enjoy doing?”