Market commentators and investment managers who glibly refer to “growth” and “value” styles as contrasting approaches to investment are displaying their ignorance, not their sophistication. Growth is simply a component — usually a plus, sometimes a minus — in the value equation.

A common misconception regarding value investing is that the “cigar butt” approach represents the main path to success.  Such an approach can in fact yield very satisfactory results over time but, in most cases, a “cigar butt” is sold when it nears intrinsic value and must then be replaced with a new opportunity.  Most “cigar butts” are good for one additional puff rather than sustained internal compounding of value over long periods of time.

Despite the difficulties involves in so-called “growth investing”, value investors should not simply “punt” when it comes to being on the lookout for companies capable of rapid compounding.  For one thing, being aware of such companies costs nothing more than reading about them and the industries involved can be quite fascinating.  Not every research prospect needs to be one that must be immediately actionable.  A bear market can quickly bring about interesting situations with “fallen angels” and turn a “growth” stock into a “value” stock overnight.

One of the more productive ways to get into a “growth” mindset is to study the history of rapidly growing industries.  In Fizz:  How Soda Shook Up the World, Tristan Donovan provides a compelling account of the soda industry from its very early days to recent controversies regarding health concerns.  Following a brief survey of the historical origins and human use of naturally occurring mineral waters, the book quickly shifts toward an account of the industry as it took shape in the late nineteenth century.

The early days of the soda industry predated the technology required to reliably and consistently bottle carbonated beverages and, as a result, nearly all soda consumption took place at soda fountains often found in the drug stores in towns and cities of all sizes.  Fortunes were made and lost during the early days with a dizzying variety of different brands and concoctions.  A technological paradigm shift took place when bottling technology progressed to the point where soda could be consumed away from the fountains and fortunes were again made and lost often due to the choices entrepreneurs made regarding whether to invest the capital required for bottling plants or to take a more capital light approach of franchising bottling rights and selling syrup to independent bottlers.

The book does not really provide much in the way of detail regarding the economics of the early industry but reveals enough to whet the appetite of readers who may wish to learn more elsewhere.  Mr. Donovan spends more time looking at higher level strategic decisions that were made to build brands over time. 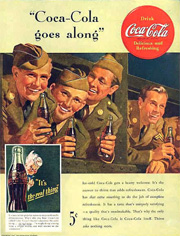 The Coca-Cola Company’s decision to aggressively distribute its beverage to all troops serving overseas in World War II for five cents per serving must rank as one of the most brilliant in business history.  Five cents was the going price for a serving of soda for decades prior to the war but sugar rationing upended the economics of the industry.  Rather than seeking higher prices, Coca-Cola sacrificed profits in exchange for the prospect of saturating the military with soda that represented a small piece of America for millions of soldiers far from home.

This move likely created lifelong positive mental associations for millions of returning soldiers who then introduced their children, the baby boom generation, to Coca-Cola.  The short term financial pain of offering cheap soda to the troops paid off enormously over the decades that followed.

Coca-Cola’s experience during World War II brings to mind other aggressive promotional behavior by companies seeking to build brands.  Obviously, not all promotional efforts end up being successful over time.  Is it possible to predict which companies aggressively sacrificing profits today are doing so with a reasonable prospect of building a long term durable moat?  Or are promotional activities actually sacrificing current profits with no prospect of improvement in the future?

For example, there is much controversy today regarding Amazon.com due to the company’s willingness to sacrifice current profitability in order to continue dominating online commerce.  Will this promotional behavior lead to a long term moat that will allow Amazon.com to eventually “flip the switch” and operate for profitability or is this a never ending cycle of intense price competition?  Although online commerce has no obvious relationship to the history of soda, it is valuable to look at how a variety of competitive environments played out in the past in an attempt to understand the present and perhaps have more insight into the future.

Readers of Fizz should not expect any earth shattering revelations when it comes to thinking about investing and business but the book might help to refine some mental models regarding competitive behavior that could be useful when thinking about present day opportunities.  It is also an entertaining and quick read for anyone with an interest in American history.

Book Review: Fizz — How Soda Shook Up the World