Over the past month, I wrote a few posts regarding potential arbitrage opportunities available due to discrepancies between the relative valuations of Berkshire Hathaway’s Class A and Class B shares.  The arbitrage opportunity identified in these posts has now been entirely eliminated as a more “normal” relationship between the Class A and Class B shares returned.  Let’s revisit what took place over the past month and the implications for the notion that the market for Berkshire Hathaway shares is “efficient”.

Relationship Between Class A and Class B

As I wrote on February 20, each Class B share carries 1/30 of the economic rights and 1/200 of the voting rights of a single Class A share.  During normal times, the Class B shares trade at roughly 1/30 of the price of a Class A share reflecting the difference in economic rights.  It is logical for the Class B shares to sometimes trade at a small discount relative to the 1:30 ratio given the lower voting rights.  However, in the case of Berkshire Hathaway, voting rights are not as relevant given Warren Buffett’s ownership interests as well as the legions of loyal shareholders who will always vote with Buffett which gives him effective majority control.  All of the details related to the differences in Class A and Class B shares are listed in this memo written by Warren Buffett.

Based on my research, on February 20, a record high spread developed between Class A and Class B shares.  On that day at the close of trading, it was possible to purchase 32.26 B shares for the same price as a single A share.  Any A shareholder was free to sell a single A share and purchase 32 B shares plus pocket the change represented by the fractional 0.26 B share.  By doing so, the A shareholder would effectively increase his economic interest in the company by 7.53% (including the retention of the cash equivalent of the fractional share).  Granted, the A shareholder would now only have a fraction of his prior voting rights, but that appears to be the only downside, aside from potential tax implications related to the A sale which could be significant.  A long position would be maintained with a significant addition to the shareholder’s economic position.

It would also have been possible to make a move that would not bet on the direction of Berkshire’s stock price but only on the eventual narrowing of the historically wide A/B spread.  By shorting one A and purchasing 30 Bs, an investor could effectively bet on an eventual closing of the historic spread.  Regardless of the direction in which Berkshire shares trade, the investor could profit when the spread returns to more typical levels.  At that time, the A share would be repurchased with the proceeds of selling the 30 B shares.  The main risk here would be if the spread widens further and does not narrow again in the future.

I revisited the situation on March 9 and noted that the spread had narrowed briefly but then became quite wide again.  On March 9, an investor could purchase 31.69 B shares for the same price as one A share.  During this timeframe, Berkshire continued flirting with multi-year lows.  On March 10, Class A shares advanced 15.9% and Class B shares advanced 19.3% which narrowed the spread significantly but did not eliminate it.

Over the past several days, the spread continued to decline gradually and it was entirely eliminated on March 25 when Class A shares closed at 86,850 and Class B shares closed at 2,900.   At these levels, the Class B shares actually traded at a small premium over the typical 1:30 ratio.  The chart below shows the behavior of the A/B ratio between my March 9 post and March 25: 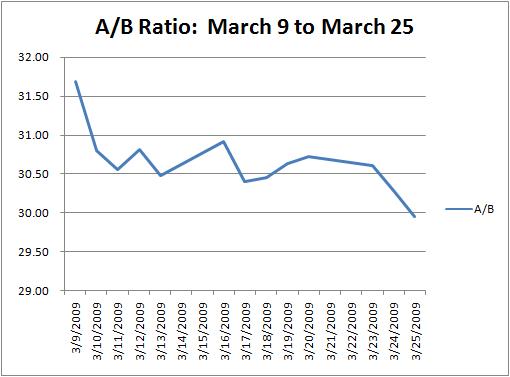 What Does This Prove?

It was possible to take advantage of this in at least two ways:

Scenario 1:  On February 20, any existing A shareholder could have sold his A share and used the proceeds to purchase 32 B shares and kept the cash equivalent of 0.29 B shares for reinvestment elsewhere.  He would have sacrificed some voting rights, but this is not material for nearly all shareholders.  Today, that same shareholder could have reversed this transaction and sold his 32 B shares and purchased one A (or alternatively, he could have sold 30 Bs and purchased 1 A, keeping the extra 2 B shares).  This investor would have had a long position in Berkshire throughout this timeframe.

Scenario 2:  On February 20, an investor could have sold short one A share and used the proceeds to purchase 32 B shares.  Today, that investor could have sold 30 B shares and covered the short of the one A share.  The investor could either keep the 2 additional B shares or sell them.  In either case, he would have profited from the narrowing of the spread.  Note that the success or failure of this operation would not have depended on the direction of Berkshire’s share price movement but only on the narrowing of the spread between A and B shares.

Is the Market for Berkshire Shares “Efficient”

It is very difficult to make the case that the market for Berkshire Class A and Class B shares is “efficient” as defined by the efficient market hypothesis when an investor could exploit conditions like what I have described here.  There were numerous other investors pointing out the situation in February yet the wide spread persisted for months.  If an efficient market is supposed to reflect all public information in the pricing of securities, surely this market did not display efficiency over the past month.

It is fair to ask whether I personally traded on this arbitrage opportunity over the past month.  Unfortunately, I did not act quickly enough.  All of my holdings in Berkshire Hathaway are B shares purchased in small quantities over a period of close to a decade.  I did not have any A shares to sell in exchange for Bs as noted in Scenario 1.  I also have not made it a practice to engage in short selling of any kind in the past and did not have a brokerage account set up to execute Scenario 2.  While I do not believe in un-hedged short selling for many reasons, I plan to set up my brokerage account to permit short selling for arbitrage opportunities like this in the future.