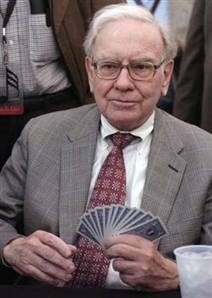 Berkshire Hathaway’s 2010 Proxy Statement was released yesterday and much attention has been devoted to the low compensation provided to Warren Buffett and Charlie Munger.  Mr. Buffett’s total compensation remained at $175,000 which included $100,000 of salary and $75,000 in director’s fees from the Washington Post.  In addition, the company paid $344,490 for Mr. Buffett’s personal security during 2009.  Mr. Munger’s salary remained at $100,000.  Marc Hamburg, Berkshire’s Chief Financial Officer, received $874,750 in total compensation. The $100,000 salary for Mr. Buffett and Mr. Munger has remained constant for 29 years, during which time inflation has eroded over 60 percent of the purchasing power of a dollar.

According to Berkshire Hathaway’s Owner’s Manual, Mr. Buffett has over 98 percent of his net worth in Berkshire while Mr. Munger’s family has over 80 percent invested in the company.  Both men wish to set an example by ensuring that their fortunes move in lockstep with the results for investors:

Charlie and I cannot promise you results. But we can guarantee that your financial fortunes will move in lockstep with ours for whatever period of time you elect to be our partner. We have no interest in large salaries or options or other means of gaining an “edge” over you. We want to make money only when our partners do and in exactly the same proportion. Moreover, when I do something dumb, I want you to be able to derive some solace from the fact that my financial suffering is proportional to yours.

As a result of this unique management philosophy and heavy ownership interest, it is hard to see how large salaries would do anything to enhance the alignment of incentives between Berkshire management and shareholders.  Mr. Buffett has stated on many occasions that he would happily pay Berkshire in exchange for running the company.  Berkshire shareholders are the big winners in this arrangement.  Mr. Buffett’s salary in 2009 amounted to approximately 11 cents per Class A share.

When a company establishes a policy on executive compensation, the arrangement needs to codify principles that will apply regardless of who holds the top management position.  Policies should not be set up such that they work when applied to unique situations but fail to work in a broader context. Unfortunately, Berkshire’s overall policy on executive compensation may fall into this category.  Here is the policy statement from the proxy:

Based on the wording of this policy, it seems like it is intended to apply over the long run, which means it will apply to Mr. Buffett’s successor as Chief Executive Officer.  The policy is indicating that the executive officers cannot be paid in a manner that is based on profitability of Berkshire or the market value of the stock.  Accordingly, stock options are not granted to executive officers.

The obvious question is how the Board intends to align the incentives of the next CEO with the interests of shareholders if they will not take into account company profitability or even the long term share price.  What will the overall compensation philosophy look like and what performance metrics will be used to set salary and bonus compensation?  These are legitimate questions that are not adequately answered in the current policy on executive compensation and require clarification.

The next CEO at Berkshire is very likely going to be someone who is motivated by a desire to follow in Mr. Buffett’s footsteps and to continue his legacy.  Money may not be a driving factor since the successor is almost certain to be independently wealthy already.  However, the next CEO is not going to have nearly as much of an ownership interest in Berkshire compared to Mr. Buffett and therefore it is necessary to formalize a compensation system that provides monetary incentives that are aligned with shareholder interests. Furthermore, this should be done while Mr. Buffett is running the company and can provide his “stamp of approval” since any successor who seeks a change is likely to encounter substantial criticism when proposing any changes to policies that applied under Mr. Buffett.